We were supposed to go to another workshop at the NFB this morning, but I promised I’d do some work for somebody, so I had to tell the kids we weren’t going to the workshop.  They weren’t all THAT crushed – we’ve done a couple already this year. But I felt so guilty that I told them at lunch that we could make our own animation instead.

I decided it should be about Pesach in some way, since we haven’t done much so far, and came up with a basic plot, based on the life of Moshe, with a list of “sets” and characters, in about two minutes.

The photography part is easy with our webcam, though unfortunately, the low webcam quality really shows in the final video.  Here’s our sophisticated video setup: 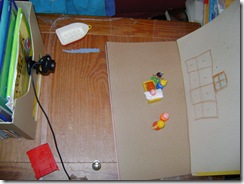 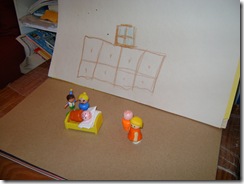 Naomi eagerly designed and drew three “sets” – a palace interior, Moshe’s family’s home, and a scene by the Nile River. 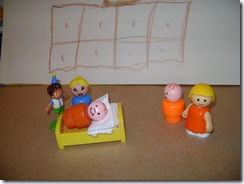 This was a particularly ambitious project because in our previous homemade animations (here and here), I’ve just whomped music right over the images and not bothered with having anybody speaking in the video.  However, now that both littles are reading, I decided it was worth trying to record a basic script.

Of course, that meant writing a script.  I actually think the one I wrote is quite terrific, especially considering it took about five minutes after we’d finished all the photography.  I’ve made the script available for download on my Limudei Kodesh Printables page here (scroll down to Pesach).  The kids didn’t entire co-operate, but luckily, I just recorded all the audio and trimming it down was a very simple matter.

The video more than compensated for how easy the audio was.  The hardest part, as always, was wrangling (my fingers seem to want to type “wrongling,” which is a FANTASTIC word!) with Windows MovieMaker, a program Download.com describes as “so easy a child could use it--an incredibly patient child born to filmmaker parents who didn't mind restarting this application every few minutes.”  I guess I AM that incredibly patient child.  Sheesh.

Let’s just say that it took about eighteen times longer than it should have due to needing to save every THREE minutes and restart due to freezing about every EIGHT minutes.  Normally I exaggerate or just plain lie about times like these, but in this case, I believe the estimate is charitable.  But I didn’t swear once, and that’s the important thing when you’re spending four hours editing a four-minute video… right???

Anyway, I’m tired and crabby, so I’ll quit while I’m ahead.  Here’s the animation.  Enjoy!