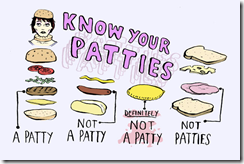 I don’t know if it’s the same where you are, but if you pass through any subway station in Toronto that offers more than just the basic convenience store, chances are there’s a coffee shop that offers lousy coffee and lukewarm “Jamaican patties.”  I put the phrase in quotation marks because I understand they are not truly Jamaican in origin… and also, thinking about it more this evening, I couldn’t help noticing they’re not a “patty” at all.  So they are probably a variation of a British-type “pasty” (a daff-sounding British word for “pastry”) with a slightly colonial flair.

Curiously, in case you’re still reading despite my droning on, I have always used the word “pattie” as the singular – a convention with which this Philipine pattie shop agrees wholeheartedly: 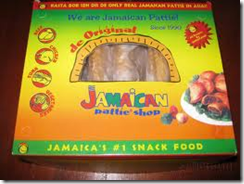 Whatever they’re called and wherever they come from, my absolute favourite meal, my default “caf food” in high school, every day or however-often I could afford it, was a single Jamaican patty, chocolate milk and two chocolate-chip cookies (I seem to recall they were sold in pairs).  The cookies were absolutely the best chocolate-chip cookies I’ve ever tasted, to this day, and my mother makes excellent ones, as do I.  And the patty… mmm… there is nothing finer while IM’ing your friends over lunch, circa 1986 (ask me how I did that if you want serious geekery!*), than green meat inside a crispy, bright-yellow crust.

* hint: to IM your friends in 1986, you must all be sitting in the same room, basically side by side.

Taking the subway a few times lately, patties have been on my mind.  Couple that with the fact that I saw a recipe for them in edibleToronto magazine a couple of months ago that didn’t look too hard (and replaces some of the shortening with coconut oil!), I thought I’d give them a try.  (When tackling a magazine recipe for the first time, I like to cross-reference with at least one “review site” recipe, just to make sure I’m on the track of delicious pattie, so I also used this very similar recipe from AllRecipes.)

Here’s the filling – very basic, ground beef, onion, curry, thyme, salt, pepper to taste.  A neat trick both recipes suggested is adding a cup of breadcrumbs and a cup of chicken soup (I doubled the recipe, which was dumb because now I have a freezer full of beef pattie filling).  You simmer them together once the meat is cooked and it thickens the filling just right.  Warning – fillings NEVER look good in pictures, but this one was delicious, trust me. 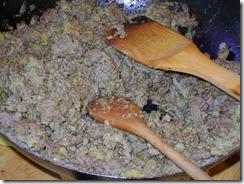 Roll out the dough – see how nice and yellow?  There’s curry powder in there, but I also added a pinch of turmeric, just for the colour.  Dollop of filling, and fold it over.  The dough was not all that co-operative, but I patched small cracks with a bit of water on my finger (careful – even a tiny bit of water made the dough too soft and floppy in places, leading to MORE breakage when I transferred it). 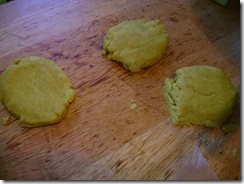 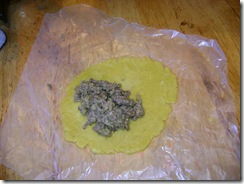 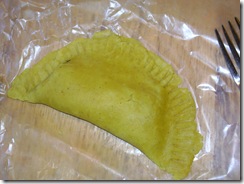 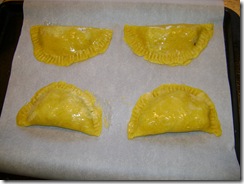 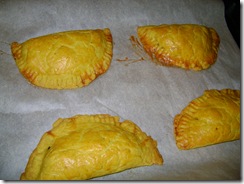 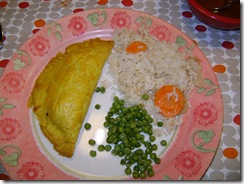 Sit around muttering “pearls before swine” as your children push it ungratefully around the plate or suggest that, being almost fully-grown, they know themselves far better than I do and they have the kind of hunger that is far more satisfied with a toasted pita bun with cream cheese. 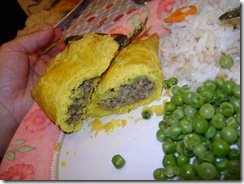 Ignoramuses!  I mean, how could you pass up perfectly lovely green meat???