Copywork and parsha activities – something for every week of the year!

When b’nei Yisrael left Egypt for home,
They didn’t forget that wherever they’d roam,
To carry the __________ of Yosef they cared,
And so at the edge of the sea they were spared! 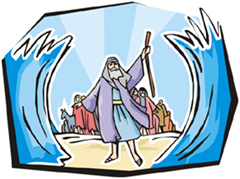 The sea was in front and the Mitzriym behind,
So you can’t pretend that the Jews didn’t mind;
They wanted to leave but were scared to proceed,
Till _______ ben _______ jumped right in to lead!

[Note: in Hebrew, the word for “manna” is מָן / “man” and  it’s pronounced, depending on where you’re from, either to rhyme with “fun” or “swan.”  Almost any pronunciation except the English word “man” is fine!]

What was the man?  Well, we may never know!
There’s nothing left now that we still have to show,
But we do know it came every day except one,
And that day was __________, and then there was none!

When Amalek struck in the desert so dry,
B’nei Yisrael just felt ready to cry.
Their strength was depleted, but they won, it would seem,
Because Moshe’s __________ were held up by his team!