Crochet Hat by Mommy, with love, to Sara

I didn’t blog this because it was under wraps as a birthday surprise, but the cat is out of the bag now.

I am very nearly almost finished crocheting the experimental “sampler” scarf I started three weeks ago.  By which I mean I’m almost out of purple yarn!

But last week, I realized I had the perfect all-natural ball of wool sitting around from a knitting project Elisheva abandoned (you may recognize it as the same yarn used for this Rosh Hashanah ram craft) and realized it would make a perfect… umm… purse?  Carry-all?  For Sara’s birthday.

I pulled it out of its hiding place and threw it on my hook and just over 24 hours later, ran out of yarn with a wonky rectangle of crocheted fabric in front of me.  Not exactly a purse.  Or a carry-all.  Or even a hanky pocket. 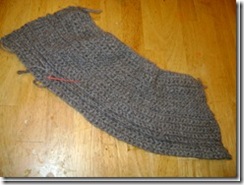 But I noticed it was vaguely hat (or skirt)-shaped, so I stitched it up with the remaining yarn (I hadn’t quite run out) and ended up with a hat that, according to Elisheva, out local knit-goods expert, wasn’t quite DEEP enough to go over anyone’s ears.  So I borrowed a skein of a contrasting but similarly-weighted merino from my mother to create… a hat!  With a tassel!  More of a fez, really. 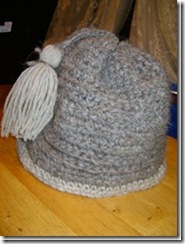 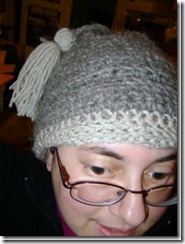 It’s warm and comfy, but not TOO warm, because it’s crocheted and holey! 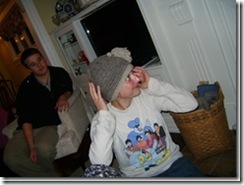 The shirt she’s wearing, by the way, is her favourite, I think: a Beatles Yellow Submarine shirt that I bought her for her 12th birthday (?) at one of those kiosks that were everywhere in those days.  It says SARA in the back in red-velvet Cooper iron-on lettering.  She’s got a long-sleeved shirt underneath, making it adaptable for any season.  I just wish every gift could be so perfect!