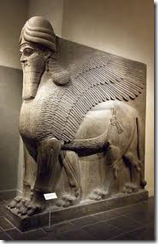 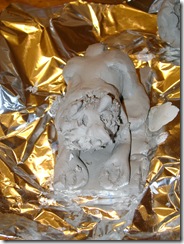 We read this week (well, heard in the Jim Weiss audiobook) about Ashurbanipal, the tyrant who enjoyed hunting lions in his spare time.  Secretly, I wanted to make a lamassu (lamassus?), the winged-lion-man-bull guardian creature (see right) which is archetypical of this period of Mesopotamian history.  BUT as you’ll see, I quickly determined that this was WAY beyond either Naomi’s or my sculpting ability, so we stuck with lions.

We did this project after Shabbos, which is just a beautiful time, when everybody is fed, rested, refreshed, slightly restless and ready for… well, we’re open to pretty much anything!

Two new or newish techniques I decided to teach her through this project.  The first was that these lions were built around an armature – in this case, balls of tinfoil for the body and the head.  We rolled flat “sheets” of clay which we wrapped around the balls of tinfoil.  The other technique was using water to smooth the clay, which isn’t so much a technique as a necessity of sculpting with clay, but Naomi had apparently never seen this before and was fascinated by how easy it was to erase lines, booboos and imperfections just by trickling some water over her lion’s head.  These lions were formed on rectangular clay bases, and should be pretty nice when dry.

She used some extra clay to make a “stamp,” similar to one we did for an earlier Mesopotamian project I apparently never blogged, where we made Sumerian seals.

More shots of Naomi’s lion (a bit hard to see because I stuck it on tinfoil so she wouldn’t glue it to the tabletop with all her water-trickling!): 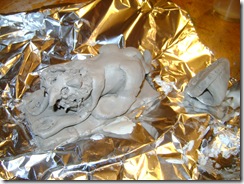 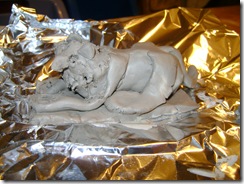 My own lion – looking more like a dog than anything else… and a pretty sorry-looking dog, at that: 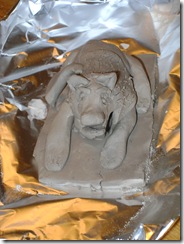 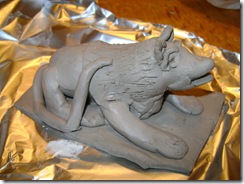 This project was inspired by a book I took out from the library called Step into Mesopotamia, which I also reserved under the name Passport to the Past:  Mesopotamia, not realizing they are one and the same.  The projects are mostly papier mache and look pretty interesting, but this is not a good time of year for papier mache around here, because it would probably go moldy before it would ever dry inside our damp wintry house.

The original lion project calls for weighted stones to be used as the base for the sculpture instead of tinfoil, but we couldn’t find any stones in the house and the tinfoil served very nicely, though these lions will not be very effective paperweights once they’re dry. 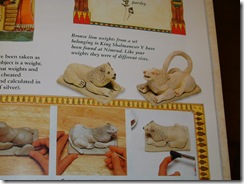 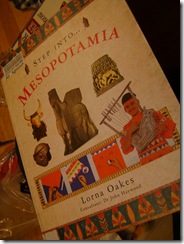 Oh – whether or not you attempt this project or something similar, if you’re studying Mesopotamia with your kids, you MUST listen to this song!

I’m a They Might Be Giants fan from waaaaay back, but this song’s reference to Mohenjo-Daro totally clinches it!

(and I just can’t wait ‘til we learn about Constantinople!)