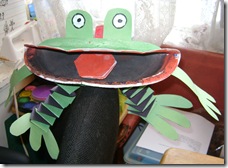 I don’t think I have ever been grateful to no-show guests…!

We’ve been doing a casual, every-other-Friday get-together with three other Jewish homeschool families (which is just about all of us here!).   Not really structured enough to be called a co-op, but a bit more substantial than a playdate.

Anyway, this week was my turn, so – being the way I am, which is not organized, as such, but not wanting to be run out of activities with other people’s kids sitting staring at me - I worked out a whole routine:  davening, parsha / parsha craft, baking with kids, Shabbos party with songs and challah.  The baking was a challenge because one of the mamas is gluten-free at the moment, but I found an interesting rice kugel recipe I wanted to try.  I also had Ted buy a Lenchner frozen challah, which everybody loves for Shabbos party. And yes, I stayed up late last night designing a fun parsha craft…this awesome little froggy!

With real jumpy legs and a mini-songbook in his mouth of our “Ten Plagues” song and “The Frog Song.” 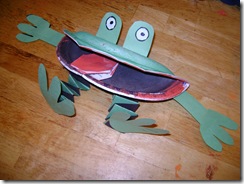 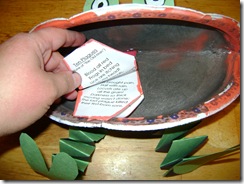 And then, this morning, with me running around on 4 hours’ sleep… everybody cancelled.

To be fair, one mama was away in Israel, so I knew she wasn’t coming.  One called beforehand to let me know that her Shabbos tasks had gotten away from her and she had to stay home.  At 8 months pregnant, fair enough!  The other called to say she had a migraine.  Interestingly, the mama who was in Israel also called: she had to come home early because her daughter has pneumonia and their insurance is pay-up-front (plus, nobody in Israel has central heating, which apparently is hell with pneumonia… ironically, she came back to Canada for the warmth).  (omg, brr)

So there was nothing for it but to do our program anyway!  Here they are with the froggy craft… 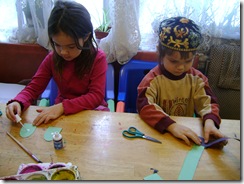 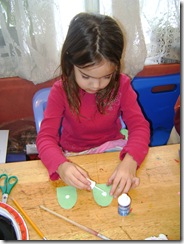 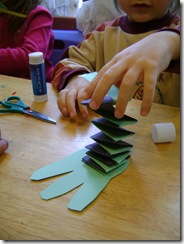 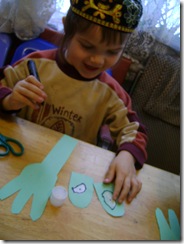 While we waited for the froggies’ body paint to dry… kugel time! I doubled the recipe because I figured each family could take a “real”-sized kugel home.  I don’t like it when kids come home with a muffin-sized whatever-it-is that they’ve been making.  So now I had a whole pot o’ rice… so we made the whole thing anyway. 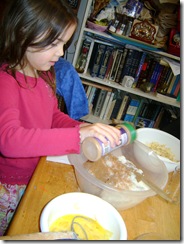 Naomi got carried away sprinkling the cinnamon.  I said to sprinkle “gently,” which in my mind means “not very much.”  In her mind it means, “keep sprinkling, spreading the magic like pixie dust throughout kugel-land, until mommy screams to stop.”  Eek.  But I think I saved it just in time.  This was very quick & easy to throw together, and into the oven it went.

And here are the froggies – dry and cute together with their little tongue/songbooks. 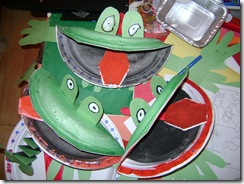 These were actually a bit more work than I had anticipated.  They would have been do-able, but chaotic, with other kids around.  As it was, we just went through them step by step.  But the kids actually managed to do most of the work themselves!

(Here are the steps, if you’re curious:  fold plate and use X-acto knife to cut a small slit in the centre of the fold; open plate up again and paint top of plate black, leave to dry; paint white circles on the eyes with white-out and leave to dry; cut out songbook, glue together; glue songbook to tongue; paint songbook covers red and leave to dry; paint bottom of plate green (top will still be damp; that’s okay), leave to dry; quarter-fold green construction paper and staple shut, trace kids’ “W” fingers and cut out (it’s 1/4-folded, so you get 4 hands in one step!); accordion-fold the long “bouncy” rear legs and glue to feet; glue short “plain” front legs to feet; use heavy black marker to outline white eye circles and add pupils; use Aleen’s Tacky or Quick-Grab glue to attach eyes and legs to back of plate (might still be a bit damp; that’s okay).  When everything is completely dry, fold plate shut again and insert songbook “tongue.”  Phew!!!)

By the way, this DOES meet my main criterion for a likeable kids’ craft: you can toss it right in the composter when you’re done.  Okay, all that white-out and paint and glue might not be the BEST thing for the earth… but at least there’s none of that heinous craft foam.  Or craft foam STICKERS.  They’re so cute, and I have probably bought them before, and the kids love using them, but… craft foam stickers are evil.

For our parsha reading, I found and blew up these little “plague” images and put them on popsicle sticks… I was planning to have the kids scramble around and find them during the parsha reading.  Gavriel Zev loves anything with numbers on it, and he happily spent some time after we read the parsha just arranging these on his own. 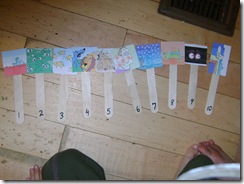 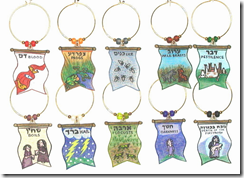 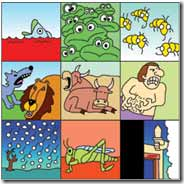 (Here’s the image I used, but it’s kind of small, so grainy when I blew them up… I also like this one, though you’d want to crop the rings off) (oh – also the one I used didn’t have a picture for darkness, so I just pasted a pair of eyes onto a black rectangle!  I may not be able to draw to save my life, but I’m Wonder Woman with cut and paste!)

We finished up a great morning with the G-dcast parsha video and, by request, the Makkos / Ten Plagues animation Naomi & I made last year (she was hoping to show this to her friends).  Then, a narration / illustration! 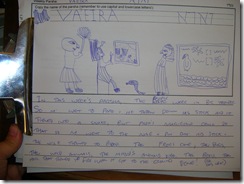 (The illustrations were all heavily influenced by her current private-reading chapter book:  Roald Dahl’s The Witches… that’s why they have extra-large nostrils and bald heads.  And by the way, YES, this is something new: she is reading a chapter book BY HERSELF.  I go in after naptime / quiet reading time and she gives me these little plot summaries.  Awesome!  I seriously never thought we’d make it to this point.)

There are so few Fridays where I am awake, showered, dressed by a reasonable hour with an actual plan of what to accomplish with the kids.  So yes, we’re all disappointed; it would have been fun to have company.  But it was STILL fun, and I’m surprisingly grateful to have had this opportunity to feel a bit “together” with my kids on a busy winter Friday!