Lapbooking Story of the World (for free)

Wow!  If you are using Story of the World Volume 1 for Ancient History, or are planning to use it at any point in the future, head on over here and download the FREE lapbook this mama put together over the year that she and her kids studied Volume 1.  It’s on her blog, but in my experience, you shouldn’t wait until you’re ready to use it, because resources come and go in the blog world.  This one is worth the not-much space it will take up on your hard drive.

As this is an all-year project, we use the lapbook intermittently.  There is one small, very easy mini-book for each chapter.  They are very professional and fun pieces that the children can put together at least partly on their own.  I do a lot of the cutting and pasting, though, leaving the creative stuff for Naomi, and some backup cutting and pasting by Gavriel Zev.

By “intermittently,” I mean “every once in a while, when we remember.”  So it could be a month, or 6 weeks, or whatever.  When the mood strikes me, I print out all the pieces we need to catch up, some on cardstock, some on coloured paper (though we’re all out of coloured paper now), some on plain paper, as is appropriate for each mini-book.

And then we just sit down and go through them!  I let Naomi choose which ones she feels like doing first.  Tonight, I also did one with Gavriel Zev.  Sometimes, I’ll put the envelopes/pockets together and have Naomi cut out the bits that go inside.  Sometimes, I split the cutting with her 50/50, because she’s easily overwhelmed. 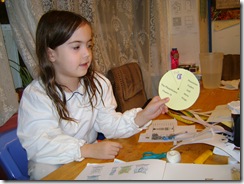 I told her we should talk about Phoenician traders before she filled this wheel in for Chapter 15, The Phoenicians, because there are eight spaces to write in and it’s been a few weeks since we covered this material.  So of course she raced ahead and did it herself while I wasn’t looking!  She did great, though a couple are more made-up than anything we read in the book.  Her eight were:  bowl, cup, “itself” – she filled in the area with purple to represent the purple dye the Phoenicians made and traded, wood, gold and silver, books (she made this up, I think!), and glass Jug (shown here, but I made her write “glass” on top of the word jug, because none of hers reflected the amazing Phoenician glassware tradition we learned about). 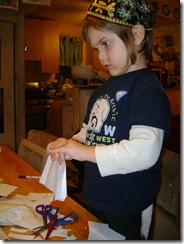 Meanwhile, here’s Gavriel Zev cutting and folding the pocket for Chapter 4, the Old Kingdom of Egypt.  I skipped the ones with pockets at first, but now I figure, why not go ahead and assemble the pockets…?  So we did!  Here are the “artifacts” to go inside that pocket: 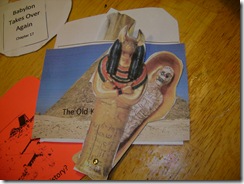 Gavriel Zev also cut out the “story” to go inside an accordion book I cut out and folded for Chapter 16, The Return of Assyria: 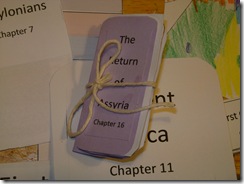 Sometimes I forget how much I love lapbooking!  Which is why this is great to keep coming back to.  Now we’re pretty much caught up, though we still haven’t done Chapter 14, The Israelites Leave Egypt.  I figured they were “plagued out” after the parshiyos of the last two weeks, so I assembled the mini-book and we’ll fill it in later on.

Here are a few of the bits and pieces in here. 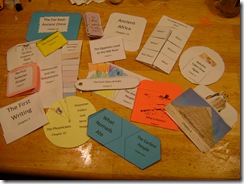 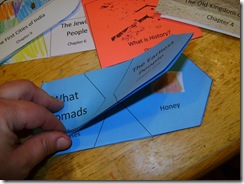 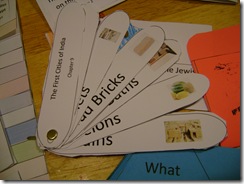 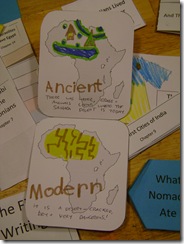 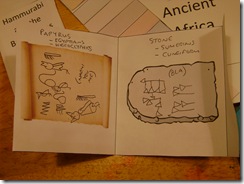 When we’re finished for the evening, we go through each of the books, in numerical order, fitting in a lightning-quick fast-forward of the chapters so far before the kids have a chance to realize they’re STILL learning! 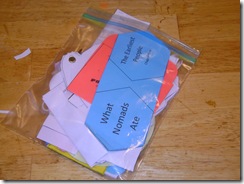 In between fits of creativity, everything stows away inside a nice, strong, medium ziploc baggie.  Of course, if anything happens to the baggie before we have a chance to put together the lapbook… well, that would be a Very Bad Thing.

Seriously, download this lapbook now even if you’re using another program for ancients.  It’s great!  The author started working on a similar lapbook for Story of the World, Volume 2, The Middle Ages, but it’s incomplete, and she hasn’t updated her blog since October.