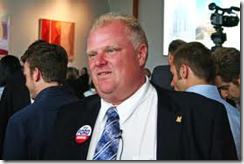 Toronto’s newish Toon Town Mayor, Rob Ford, weighed in last week at 330 lbs and vowed, in a pun on his many campaign promises, to “cut the waist,” initiating a campaign and special website (paid for out of his own pocket; the city isn’t paying a dime, apparently) so you can follow his progress as he weighs in every Monday.  As of today, he’s down 10 lbs… water weight, I say.

But as he challenged Torontonians to join him in losing their “waist,” he mentioned “hitting the gym,” which is a fascinating irony given that not everybody in this city has the money to join a gym in the first place, even in a season in which outdoor exercise is an iffy proposition.

But wait, you say!  What about the Welcome Policy, which ensures that citizens at every income level will have access to healthy and enriching programs for themselves and their children?

Ha ha ha.  You see, I signed up for my regular Tuesday-morning aerobics class, the one I’ve been taking since, oh, 2008 or so.  Now, since the class is held in a rather “ghetto” neighbourhood (the city calls it a “priority” neighbourhood), the class was FREE last year and the year before and every year before that.  Not only free, but they offered free childcare, which I actually used for a while until Naomi Rivka got too old.  Then, along came Rob Ford, with his plan to “cut the waist,” I mean, “waste.”

At first, they said there would be a small “user fee” for the course.  Fine; I can handle a user fee.  When I asked three weeks before registration last year what the fee would be, nobody could tell me.  Then, registration opened up and I found out: no user fee, but a $70 course fee.  The aerobics class had gone from $0 to $70 overnight.  For me, this was no problem, because we are pre-approved for Welcome Policy funding, and I signed up anyway, hoping a few other people would as well.

As it turned out, I didn’t get to a lot of classes last fall.  The ones I did go to were sparsely-attended: maybe 5 people, instead of last year’s 30.  And now, for this session, they called tonight to let me know they didn’t get enough people to go ahead with the class.  Well, duh!  There are a lot of numbers between $0 and $70… did they think about trying one of THOSE???

But that’s not the funny ironic part when I hear Mr. “Swanky Etobicoke Mansion” Ford saying we should all hit the gym – or whatever.  Here’s that bit: although we are preapproved for Welcome Policy funding, now that they’ve informed me that my (funded) class is cancelled, I still can’t switch to another class… because the funding has already RUN OUT for this session.  So I’m stuck – no class.  (y’all knew already I had no class, right?)

Funding always seems to run out very quickly, like within the first couple of days of registration – in fact, I’ve been warned before to call in right away when registration opens so we don’t miss it.  Now, these are not people lying and cheating to use up the funding… these are folks who are preapproved annually based on need, who are still being told that they can’t take classes, join gym programs, and so on.

Apparently, me, my family, and our economic ilk are a big part of the “waist” Mr. Ford is trying to cut.

Still, I wish him luck in his own personal weight-loss regimen if only for the humour value.  In one of the funniest things I’ve seen in a long time, he’s asked Torontonians to make a pledge to charity, any charity, for each pound shed (and by the way, somebody might want to tell him that Canada switched to metric back in the ‘70s).  There’s a list on his special site of the charities who will benefit from his loss which contains many smirk-worthy entries.

A few I spotted: the “Cacti Association Of Canada,” the “Endin Diabeetus Fund,” “Small Wooden Shoe” (oh – this is a legitimate theatre company!) and “Matt Foley Motivational Speaking” (apparently named for a fictitious character of the late Chris Farley, though I didn’t know this).  Several gay and gay-positive causes show up on the list:  the 519 Community Centre, Pride Toronto, Casey House, various AIDS beneficiaries.  There’s also a pledge to “The Animal Farm,” which is probably a semi-literate reference to the animals of Riverdale Farm, one of the city’s resources that Mr. Ford would dearly love to shut down.

Oh, and someone named Sam X has pledged to support “The Idea Fund Of Sam Xu.”  Let me know where to send my cheque!

(Apparently, I’m not the only one to have noticed this phenomenon… but it seems someone on Mr. Ford’s team has as well, because most of the funnier “charities” have been edited off the list… click the picture to see a bigger version.  I wish I’d thought of “save the libarys”!) 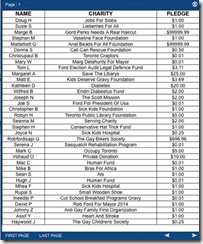 We Torontonians may no longer be able to afford to stay fit and healthy, but we are rich in chuckles, and out of the depths of winter’s despair, Rob Ford has come through for us as a beacon of guiding light once again.