My cheesemaking kit arrived! (caveat for the kosher consumer – not everything from this site has a hechsher; please email them if you’re not sure and although I bought a kit, I actually had to order “doubles” of some of the items just to make sure everything was under hashgacha)

My first concern was our milk… the Jewy Mehadrin 1% milk we usually buy says right on it “kashered at 212 degrees,” which I’ve never understood (kashered?  is it a pot? an oven?  was it trayfe to begin with?).  According to most experts, whatever it might mean, that kind of temperature makes the milk completely inappropriate for any kind of cheesemaking.  Both because the high temperature ruins the proteins in the milk and because it’s low-fat, therefore, mostly water.  And yet…

Here’s my first experiment with a quick (30-minute) mozzarella.

Heat the milk with citric acid; add rennet.  Let it sit for a while, then slice.  I was so impressed that this sliced up beautifully – just like in all the how-to’s I’ve been reading all week in anticipation! 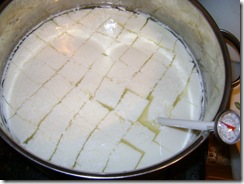 Sure looks like a lot, doesn’t it?  Apparently, it was all on the top.  After a bit more heating and stirring, I shlurped out the cheese… not very much indeed, considering I started with 2 litres of milk! 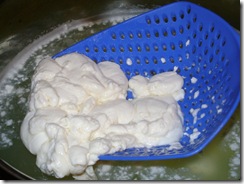 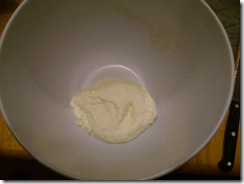 I knew this would happen, because I’ve made paneer before, but I was expecting a bit better yield with the professional additives…

Heat it in the microwave to the proper temperature and then, well – kneading!  I love kneading!!!  At first, it was grainy (like small-curd cottage cheese or ricotta) and I was feeling discouraged, but then, once it hit the right temperature – it STRETCHED!!  (according to this website – which isn’t kosher, by the way - it should be “almost too hot to touch,” which is a wildly varying thing depending on how much you handle hot things, and I, like most of the how-to writers, found I had to wear gloves) 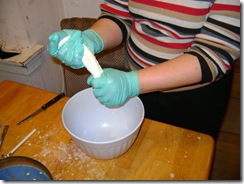 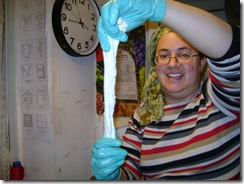 With a few more trips to the microwave, it actually started forming those little strings you see in mozzarella.  Eventually, it seemed as close as I was going to get to the beautiful glossy ball in the pictures, so I had Ted mix up a quickie marinade with olive oil, salt and a few herbs in a baggie, and I tossed the new mozzarella in. 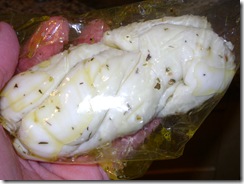 I had a ton of whey left over, and most of the suggestions (add it to soups, stews, breads) for what to do with it are not all that helpful in a kosher home.   Most people suggest you make ricotta (which is, after all, the Italian word for “re-cooked” whey), but when I tried, I only got about two tablespoons worth of milk solids left in the cheesecloth, and it wasn’t that flavourful.  So I’ll try something different next time.  (They do suggest bathing in it for glowingly beautiful skin… would that make my bathtub dairy??  Could we still use it during Pesach?)

Anyway, I took a tiny taste, and my reaction wasn’t “extraordinary,” but it was pretty good.  I’m saving the rest for Shabbos, and I’ll report back then!

Postscript:  Hmm… a bit bland (needs salt?) and a bit too hard.  From the braided mozzarellas we’ve been able to buy here, I was expecting something a little softer.  Anyway, I’ll try a different recipe next time and keep on reporting back until I’ve got it perfect.  I don’t love cheese, but I do love knowing where food comes from and how it’s made.  I don’t think this will become an avocation (or another blog) the way bread has, but I do find the chemistry behind it fascinating…