So I slipped it into this post a couple of weeks ago but nobody set off fireworks, so here it is again: 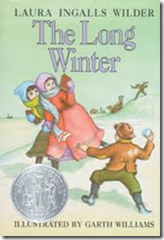 We finished The Long Winter!!!  It was a very, very, VERY hard book to get through.  The rollicking image of winter fun and snowball fighting on the cover is a LIE, I tell you.  They’re just plain lying if they tell you this book will be any fun at all.  It’s a town of barely 100 people slowly, slowly, painfully starving to death over a vicious prairie winter that lasts from, I believe, early October until May.

In fact, if you’re fascinated by such things, there’s actually an adult nonfiction book, The Long Hard Winter of 1880-81: What was it Really Like?, that sounds like it will happily fill you in on all the gruesome details.

The Laura Ingalls Wilder book itself is aimed at kids, so everything comes out fine in the end – nobody starves, and the family eats the very last of the grain basically the minute the five-months-overdue train pulls into the station.  Which is quite a relief after about thirty chapters with titles like, “No food still,” “More cold” and “Another blizzard.”  (I just made these up but they are representative of the actual titles, I promise.)

We only had three chapters to go, chapters we were all probably dreading, and then, mysteriously, we lost the book (which happens a lot around here).  So the week I lost my voice, I cheated and found an unabridged audiobook version and let the reader finish it for us.  Yay! 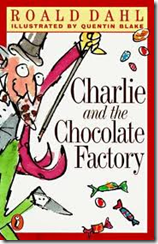 As we always do, we’re currently taking a break before diving into the next book, Little Town on the Prairie, to enjoy another Roald Dahl classic, Charlie and the Chocolate Factory.  When we’re done, I’ll pick one of the film versions for us to watch together, too. 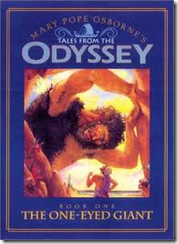 We’ve also put our Magic Tree House books on hold, right between Day of the Dragon King and Viking Ships at Sunrise.  Instead, we’re reading the first book in a much more serious series from the same author, Mary Pope Osborne, called Tales from the Odyssey – we’re currently on Book #1, The One-Eyed Giant.

There are 6 books altogether, which offer an excellent retelling of the Odyssey stories except for the fact that there are no images except a map of the Mediterranean inside the front cover and pictures of the major gods inside the back cover.  (I told GZ he has to imagine what the pictures would look like inside his brain.) The series is also available as a two-book set (Book 1 and Book 2 sold separately) instead of six different books. 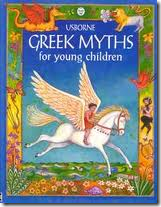 We are also – intermittently – diving into mythology with a smaller Greek Myths book (I gave up on D’Aulaire for the time being, though it’s a beautiful book, because the stories are long and don’t have definite starting and stopping points).

Finally, still slogging away through two more:  Fifty Famous Stories Retold – we have already gone through the entire book, but the kids don’t realize it because it took so long; and Child’s History of the World, in which we just passed the Year 0, so we have now entered CE dates (which the book calls AD, but I change them as I read).  We have been reading the first since last winter and the second since this past summer.  I figure we’ll read Fifty Famous Stories one more time all the way through and move on to another Ambleside selection; as for the history book, I’m hoping it will take us about two years to finish, making it my most ambitious read-aloud project yet.

So there we are – our current read-alouds!  (And please, PLEASE forgive the links if you find them annoying.  As you know, I get most of my books free from the public library, but the linkies in posts like these go straight to Amazon, help you know exactly what I’m talking about, and actually earn me tiny bits of real-world money towards consumables and the rare must-have books I can’t get at the library.  So if you’re interested, DO click the links!)

Now ask me if it gets any easier to keep on slogging away at these; no, actually, better you shouldn’t ask.  There are few things I dread more than reading chapter books aloud.  I’m okay with short picture books, but with chapter books, there’s the stress of “where’s the book?  wasn’t it in my bedroom?” and so on, on top of keeping the thread of the plot active in my mind and theirs.  I know, these sound like little and dumb things to complain about.

But, no, it doesn’t seem to be getting any easier… reading aloud is SLOW and inefficient (I’d rather be REALLY reading, quietly, to myself!) and chances are, I’ve already read whatever it is anyway.  I haven’t come to love it, as snuggle-up time, like some parents do.  But at least I get to brag about it on here and hope that you-all will understand that I am doing my very best with this to overcome my own lazy nature.

Click here for more about our chapter books, past, present and future.

Now that I’ve had my turn, anyone else have any chapter-book accomplishments they’d like to crow about???