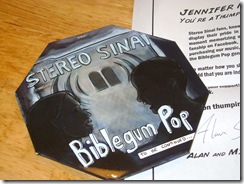 I guess the word “Gift” should be in quotation marks… since I bought it for myself.

A few weeks ago, I pre-ordered Biblegum Pop, one of Stereo Sinai’s first two albums (Biblegum Pop was released simultaneously with another album, The Revelation Will Not Be Televised), and it arrived in the mail today – just in time to help me get some cleaning done around the house.  Which is no small task; to get the job done, it apparently takes a unique combination of smart lyrics from the Tanach, catchy electronic tunes… oh, and a couple of friends coming over for Shabbos Party tomorrow.

The CD came with a personalized, signed letter from the band and this weird, lapbook-style nifty fold-up envelope that I will probably never figure out how to refold ever again.  Oh, and a bookmark that announces, “we steal lyrics FROM GOD.” 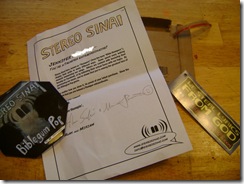 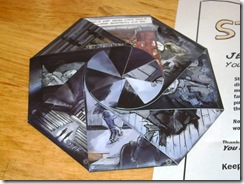 Time to crack it open… 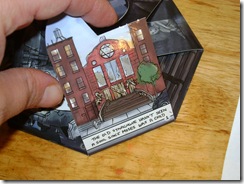 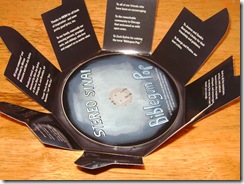 The case will never be the same again.  Perhaps I’ll have one of the children try to refold it.

I’d heard many of the tunes before:  Mi Yimalel, in particular, is one I’m just about sick of after two weeks of the kids’ nonstop requests for it.  I also already have #3, Gideon’s Song, #5, Lech Lecha, and #12, David and Goliath.  So out of 12 songs, that’s four I already owned for free… not a bad ratio, in fact.  The new tunes are wonderful; melodic and beat-driven, and range from the traditional Yiddish Tum Balalaike to the catchy all-Hebrew David and Goliath (“Im telchi imi, v’shalachti…”).  Oh, and the Aramaic Beautiful City (taken from Yah Ribon, a Shabbos zemer).

Musically, the songs range from – well, Tum Balalaika again! – to Blues of Glory, which I’d describe as “blues-ish,” featuring lyrics “stolen” from Anim Zemiros, a song often sung at the end of Mussaf on Shabbos.  Throughout the CD , there’s also a generous helping of the likeable, danceable electronic sound Stereo Sinai is known for.

Weirdly, though Hashem’s name is sung as “Hashem” on several songs (Radiant Faces, Lech Lecha), a couple use what sounds like “amonai,” or “abonai” (like on Good to Me) a form I’ve never heard before (though I have heard Leonard Nimoy pronouncing it “adomai” on the Birthday of the World Yom Kippur CD).  In one case, I believe I heard one of God’s names sung outright, but I don’t remember on which song, and it certainly didn’t bother me.

I was a little sur”prised” that one of the songs is a reprise ( haven’t counted it in the “12 songs” mentioned above – there are actually 13 tracks).  On an album this short, in the age of shuffle play, it may be slightly pretentious to imagine that people miss your song so much after 20 minutes that they need to hear bits of it all over again.  Maybe.

Still – the album works, and I’m relieved.  I’ve been following Stereo Sinai for 2 years, since I first heard their song on the G-dcast Lech Lecha parsha video and was hooked.  I’d liked all the individual songs so far, but wasn’t sure how they’d all fit together, or whether the effect would be either watered-down or overwhelming.  Biblegum Pop manages to strike a nice balance between several different styles, coming together to paint a compelling picture of contemporary Jewish music.

Which is great news, because look at all this laundry…! 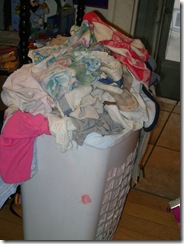