So why the dodecahedron?  Why my obsession with mixing math and Torah?  How about mapwork – why bother showing kids maps of where the weekly parsha took place?

Sadly, there is a tremendous need. The big kids went to Jewish schools, and I saw the extent of the secular resources they had to use. There really is nothing else out there that mixes Torah with math, say, or English composition, or copywork, or... anything. :-(((

In fact, I’d say the teachers outside of the “Jewish studies” departments rarely put much thought into making their curriculum Jewish at all.  Okay, in the early grades, they can do “apple counting” before Rosh Hashanah, but that’s more of a fall activity than anything else.

Two examples that shocked and/or surprised me, and I think they were both math-related (but remember, I am easily shocked):

A third example I just remembered:

(does anyone else remember that the centre of these poppies used to be GREEN???)

In all three of these cases, I did tell the school that what they were doing actually undermined the values they were trying to reinforce on the other side of the hallway, in the Limudei Kodesh (Jewish studies) classes.  Most of the time, when something like this happens, their reaction is something like, “thanks for letting us know,” which is what I would say, too, if I didn’t intend to do very much about it.

As much as people mock the homeschool world for popular resources like Rod & Staff Books, a Mennonite publisher which offers grammar lessons that look like this (Identify Who, What, Place in the following sentences:  “A prophet took a ship to Tarshish,” ”Ruth gathered grain near Bethlehem,” “Jesus broke bread by the seaside.”).  These books are refreshing in that at least these folks put their money where their mouth is – they accept that faith and education need not be polar opposites, and that religion can and MUST infuse every aspect even of supposedly “secular” studies. 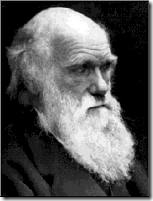 However I personally feel about the age of the world, evolution, etc., I was distressed a couple of weeks ago to see that my teenage daughter’s first introduction to Darwin/ism came not in a context informed and infused with the spirit of yiddishkeit (which is generally found throughout her school in a mostly delightful way), but as part of a course in Human Growth and Development (ie Psychology) where she was left on her own to give an opinion, in an essay, about whether his theories of child development were logical.

I may not agree with the content of Christian “worldview” courses that expose children to arguments for “Young Earth Creationism” (disagree!), at least such courses acknowledge that Darwin’s ideas OUGHT to be considered as part of a religious person’s worldview, not just tossed at kids in passing in a psych course.

Finally, as I have read in so many Christian publications, kids too often – including in Jewish schools – grow up learning history and geography as concrete disciplines, grounded in places, maps, dates, times, personalities of historical figures and geographical leaders.  All the rich characters and textures of the world around them.

And then they crack open the… well, let’s call it the Torah, though the reading I’ve done calls it the Bible.  They crack it open and there it is, dry and discrete; a discipline unto itself, studied for its own sake, often without even a nodding reference to its connection to the outside world – its historical setting, its places and times and characters; the personality of its literature and the texture of its narrative.  Yawn. 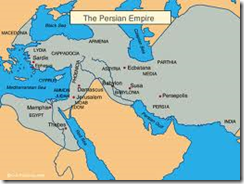 In history, I remember learning about Egyptians, Sumerians, dinosaurs, pioneers and the Great Depression.  I never learned about Achashverosh and the story of Purim, and nobody ever bothered showing me a map like the one here and told me that, though his “Hebrew name” was Achashverosh, his “Persian name” was Xerxes and he was known and feared throughout the biggest empire the world had ever known.  I figured Purim was a Jewish story – obscure and not really interesting to the rest of the world, never realizing how central Jerusalem and its Temples, its Jews, have been to the history of the Western world.

We were tricked, I believe, into thinking that, as educated Jews-of-the-world, even WE shouldn’t care very much about particularistic stories that are “only” found in the Tanach.  Mapwork, copywork, math work alone don’t fix the problem, but they go a long way – I think, I hope, I pray – towards mending the rift.

The violent separation of religion and academics strips both of these disciplines at any chance at higher meaning and relevance in our kids’ lives, and I really, REALLY wish Jewish schools could see this too.