Notes from the last year of nummies*:

* As with Naomi Rivka, if he hasn’t already stopped on his own, Gavriel Zev’s next birthday will mean the End of Nummies. 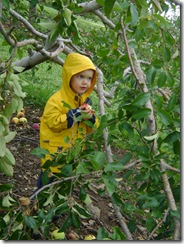 I thought maybe FEEDING them, but the truth is, I don’t feed my kids every single meal, 3000 times in a row.  Some meals are take-out; some are cooked by Ted or my mother.  I guarantee you, nobody has ever nursed one of my kids without me knowing about it.  If we skip nummies, nobody jumps in to take my place.

There HAVE been a few exceptions, nummy-wise, too:  days without nummies at the beginning and/or end of the day.  But then, on almost every one of our days together, we have also nursed in the middle, before and/or after naptime, which I wasn’t even counting in the total.

Those are the only times now:  before and after sleep.  They have been since just about when I introduced solid food.  Call me cruel (my kids all do), but with both Naomi Rivka and Gavriel Zev, I have only ever nursed on that schedule:  nummies at sleep times only.  For a believer in attachment parenting, I sure have a lot of boundaries (we never co-slept, either… and over 6 months, I didn’t nurse in the middle of the night, period).

I do feel guilty, because none of the other kids had this long to be close and cuddle with me all alone.  But I figure every position in the birth order has its downside and its perks… and “baby of the family” is a heck of a downside, much as “oldest child” and “older middle child” might vehemently disagree.