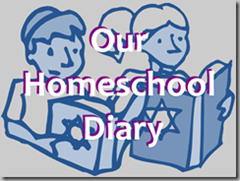 Still not quite back to normal, but thanks to starting on Sunday last week, we actually fit in 4.5 schoolish kind of days…

We’re “between” math books – finished JUMP Grade 1, but I thought it would be a fun change of pace to finish the Miquon Orange book before jumping into the Grade 2 books.  Naomi seems to be enjoying the freedom of choosing her own worksheets, though it jumps around a bit.  She enjoys the “make up your own problems” even if she sometimes doesn’t understand what sort of thing she’s supposed to make up.  Here’s one she did for me deliberately… she loves these little “circle equations!” 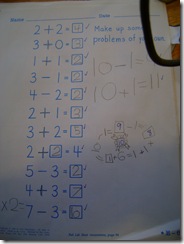 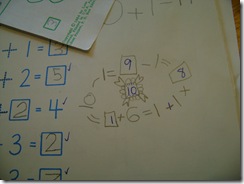 I have also added in regular “math out loud” lessons from The (poorly-named) Verbal Math Lesson.  As with Miquon, Naomi Rivka is really enjoying the challenge of doing something quite different from what we’re used to!  The book offers a nice mix  of straight arithmetic and word problems.  Most of the word problems are easy for her, but every once in a while, they throw in a tricky one, just to keep her on her toes.

Here are the kind of problems at the BEGINNING of the book, which picks up about midway through our Grade One math book, arithmetic-wise… 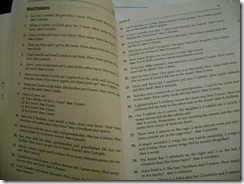 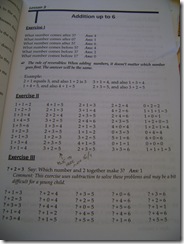 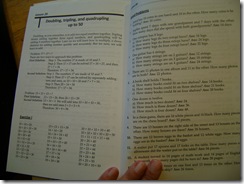 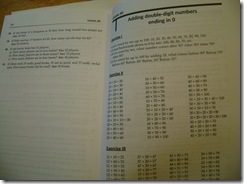 In my opinion, the book is entirely self-contained, in that even if you were doing no other math program, the child would still progress to the point where she was able to do the questions at the end of the book with relative ease.  They recommend that you repeat the lesson next time if the child gets a lot of questions wrong, and offer sparse hints for teaching new concepts, but it is VERY bare-bones, and reminds me a lot of some of the older books, like Ray’s Arithmetic.

Speaking of older books, we finished Book 1 of the McGuffey’s Eclectic Reader series!  She grumps about working through these, but is positively charmed by the stories and the exploits of the astonishingly free-range kids of 100 years ago.  We call them her “Mug Readers.”  (because that’s how we pronounce it: “mug-guffey”)

I am very impressed when I look at the complexity of the sentences and the variations in punctuation and language that she is expected to master with this series.  I don’t think any modern Grade One reader is on a similar level.  We started Book 2 right away, the following day, and I’m looking forward to it, though it has more script selections, which will continue to confound her until we start doing script.  Book 2 includes poetry readings, longer stories, and other, more varied selections. 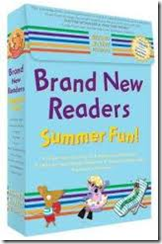 Frustratingly, all this success doesn’t mean that she is reading for pleasure at anything like a fluent level.  During quiet reading time, I suspect she is mostly staring at her books, looking at words here and there, but largely perusing the pictures.  Today (on Shabbos), I told her I wanted her to tell me about a story she’d read after quiet reading time. 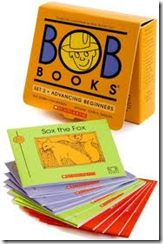 But I think she was mostly telling me about the pictures.  She reads, grudgingly, but it’s still not exactly something she does for pleasure.  I can’t wait for that particular “click” to happen.

Gavriel Zev, on the other hand, will sit down and (out loud) sound out every single word even in a fairly long book. He loves the sound of his own voice ANYWAY, and his own voice reading him a story…?  Well, that’s just the perfect combination, as far as he’s concerned!  He’s still working his way through the Bob Books, Set 2, along with this Brand New Readers Summer Fun boxed set that I bought for Naomi but was too basic for her by the time it arrived. (I didn’t realize they were mostly easier than the Winter Fun boxed set, which she was reading back in January). 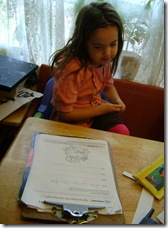 Here is her majesty in a little bit of a grump doing our Evan-Moor daily 6-trait writing.  I often combine a couple of days because otherwise the lessons are too insubstantial and it can seem twaddley if it doesn’t seem to go anywhere meaningful. 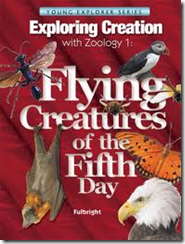 Continuing on in Apologia Science…

Because of our butterflies field trip a couple of weeks ago, I have jumped to the insects section of the book – forgetting last year’s science lesson, which is:  NEVER ATTEMPT A SERIOUS INSECT STUDY IN LATE FALL IN CANADA.  After a summer rich in bugs of all kinds, it was a challenge to locate even a single ant for what the book calls the “Lazarus Experiment.”  (but I didn’t, because we don’t have that particular story in our Bible!)  Then I remembered the swarm under the front garden bed, and dug them up – they were all there, hiding underground.

For the experiment, you basically DROWN an ant.  I had a friend over for a playdate and she was horrified, I think, watching me hold the ant underwater with a spoon.  They really, REALLY do not want to drown, but eventually, two out of three sank like stones.

Once you have successfully drowned the ant and left it there at the bottom for 3-5 minutes, you scoop it back up and toss it on a paper towel.  Cover it completely with salt, then brush the salt off gently with a paintbrush.  After about 5 minutes, the book says, the “dead” ant will walk again. 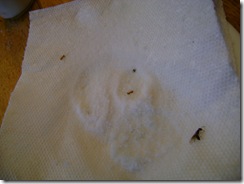 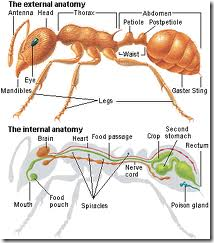 And what do you know… IT WORKED!!!  This experiment demonstrates that insects breathe with their legs and that they have openings, called spiracles, on their legs which they can close to prevent water from getting in and drowning them.  I assume the “playing dead” is a survival mechanism because a predator might not chase them all the way to the bottom of the water.  Though how they are supposed to come back up to the surface on their own once they have “died” and the coast is clear, I’m not sure.

Anyway, the kids were a bit less impressed than I was, and even though I demonstrated to my friend repeatedly that the ants were still alive, t the next day, she reported that she was “still traumatized.”  Okay!

Naomi has become fascinated with insects of all kinds, by the way.  She trapped a big black fly this evening inside a plastic tub and called it “her buddy.”  She was bringing it scraps of food, and called out, “I see its proboscis!”  So… okay again!

Gavriel Zev drew a dinosaur, then refused to let me take a picture.  But tough, because I think it is the cutest thing ever… 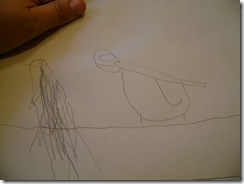 And, finishing up the week on Thursday (Fridays these days are mostly for cooking, baking, and a quick parsha review and narration), we finally did the Draw Write Now “number-two” swan!  Super-easy, and I told Naomi I would animate her results… so here it is! 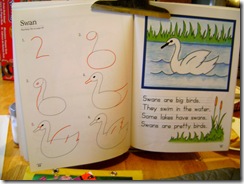 So what’s everybody else out there up to, these last couple of weeks???