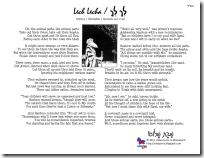 This week’s poem refers to one of the more obscure sections of Lech Lecha, which contains so much juicy stuff up front that this dreamy little sequence often gets forgotten… but it’s in there.  Read it yourself; it’s much as I’ve described it here. 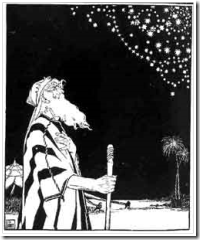 It might seem strange, or even bizarre,
To see them lie there the way that they are,
But when the instructions come from Hashem,
Please listen closely and just follow them.

Three cows, three rams, a goat, bird and dove,
Old Avram listened when push came to shove;
Cut them all up and then laid them in pairs…
Ignoring his neighbours’ curious stares?

Then vultures swooped in, snatched up the meat,
He chased them and they flew off in defeat;
But bad news was coming, as Avram soon learned,
Three sad, bitter exiles, Jerusalem burned.

“Your children will serve, be oppressed and trod low,”
Hashem warned Avram, “though they will grow.
The nations that harm them, I’ll call to My courts
For each time they’ve hurt a Cohen or Schwartz.”

And Hashem consoled him, “It’s all yet to come,
“Generations who’ll know just where you came from,
You will be remembered, respected, revered;
For standing and facing the fate that you feared.”

“That’s all very well,” was Avram’s response,
Addressing Hashem with a rare nonchalance;
“But no children have I or my good wife Sarai,
So just who’s left to carry on when we die?”

Hashem walked before him, between all the parts,
The grimy goat skins and the huge heifer-hearts;
“All things are possible with Me,” he explained,
(Using words not in our scripture contained).

“I promise,” He said, “grandchildren like sand,
So many inheriting My precious land.
They’ll walk on its soil, its breadth and its length,
Breathe in its air, let it fill them with strength.”

Then Avram saw how the years would unfold,
Generations in exile, a nation grown old;
Astonished to see they were still holding fast,
Clinging to Torah with faith unsurpassed.

“Ah, now I see,” he said, joyous inside,
As he hurried off, a new spring in his stride
At the thought of children, the hope of his life –
“But now I must share this with Sarai, my wife.”