This one wasn’t free, but it was worth the trip!

We got amazingly BEAUTIFUL weather – about 17°C, ten degrees warmer than average for this time of year – so we had a picnic outside facing the Ottawa River.  Of course, I forgot to get a picture of the river itself… but here’s the family! 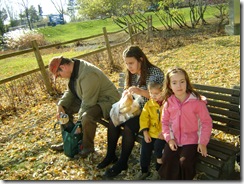 Here’s someone else’s picture.  Not quite as green at this time of year, but still, a marvellous vista. 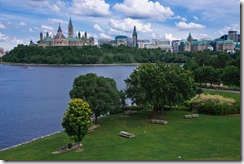 We started our Museum visit with the Canada Hall, because it blew me away last time.  We were NOT disappointed.  For anyone reading this who cares, THIS is how you do a museum.

First of all, a small thing.  Many museums have displays of tools from antiquity, and mostly, the tools are just lying there.  THIS is how you do it, museums! 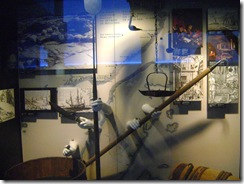 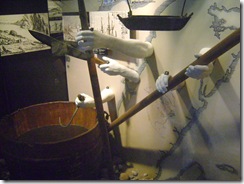 Notice all the tools are displayed in lifesize plaster HANDS, so you can see how they worked and what they were supposed to do?  Notice how this makes them come to life???  Notice they are not just LYING there in a display case with a number beside them?  I wish somebody from the Royal Ontario Museum here in Toronto would go there and take a look…

The exhibit itself is a journey through over 500 years of Canadian history, starting with Viking ships and ending with, well… 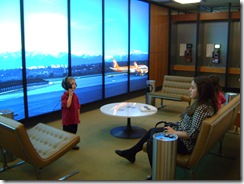 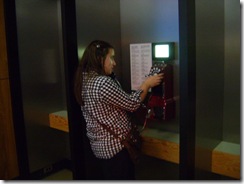 …the age of air travel!  This is a recreated waiting room meant to simulate the experience of flying from Vancouver to Asia, I guess in the late 1960s and early 1970s.  They have a list of people you can “call” on the phones in the booths – a different 4-digit number for one of many different immigrants and travellers to and from Asia.  The only problem was… 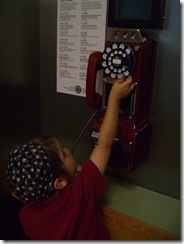 …Elisheva Chaya:  “How do you dial a number on these phones?”

She has SEEN dials of this type (the only kind we HAD as kids) all her life, but never knew exactly how you used it to enter a particular phone number.  So I showed her, explaining along the way why it was considered better to have a LOW number (like 967-1111) rather than a HIGH number (like 967-9999).

Perhaps in my old age, I can go speak in schools about this and other experiences from my youth.  “We had to pick up the phone – no, you couldn’t walk across the room with it because of the cord.  A cord?  Well, it was a long curly thing, like a ponytail elastic… and you should have seen our floppy disks!”

Anyway, that was just the END of the exhibit.  The rest of it takes you on a winding path through towns, prairies, buildings.  There are some “characters” – lifesize plaster figures representing inhabitants or explorers, but mostly you’re just left on your own to wander and explore. 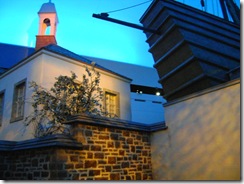 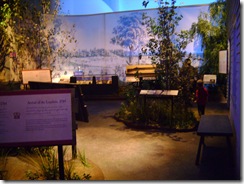 Elisheva and Naomi got involved in some sort of revolutionary plot… 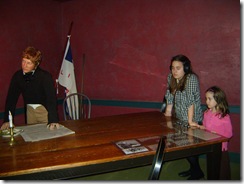 … for which they were promptly jailed! 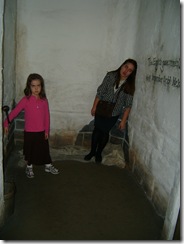 They even spent a few minutes in school. 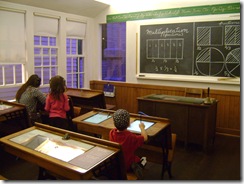 This is the Toles Schoolhouse, from a town in Alberta which received a large influx of black Oklahomans in 1907 (the state was apparently becoming hostile to black people then).  Because it’s so recent, there are recordings at a few places in the schoolhouse where you can listen to stories of former students of the schoolhouse. 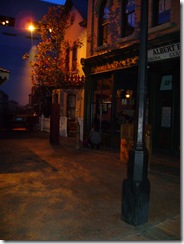 Winnipeg, Manitoba had a large Jewish population and there are Yiddish newspapers on display in the print shop window, along with Ukranian, German and other languages that were heard across the prairies.

After that experience, there was only a little time for one of our perennial favourites, the Children’s Museum: 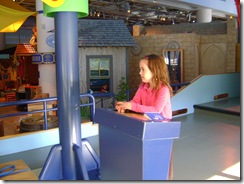 Not enough time – Gavriel Zev was screaming as we left.  I guess I should consider myself lucky to have the kind of kids who scream when we LEAVE a museum.  But the truth is, he screams when we leave just about anywhere.  We’re working on it. 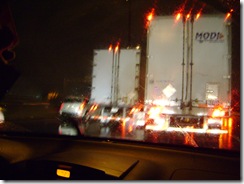 And now, in case you hadn’t guessed, we’re BACK!  After a pleasant drive with absolutely no slow-downs and obstacles, welcome to Toronto, boys and girls, home of the tail-lights and rear ends of two hundred thousand trucks all lined up in front of us, all apparently going exactly where we’re trying to get to.