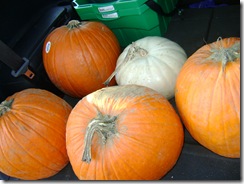 Pumpkin!!!  Great, cheap pumpkins!  Getcher unwanted November 1st pumpkins while they last.  Last year, they were actually FREE ourside our local supermarket.  This year, they’re up to 49 cents, an increase of more than a zillion percent.

An older Italian couple, maybe in their early 70s, were walking by as I was tossing six of these in my cart.  They did a double-take after they passed  me.  The woman turned and asked, “What do you DO with those???”  Like I was loading up the cart with big orange boulders.  Very, very strange.  I told her we COOK with them, but in my head, I was saying “REALLY?!?!”  Thinking of all the amazing Italian things you can do with a pumpkin… 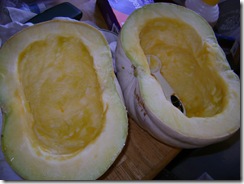 The easiest thing to do with a pumpkin (works for ANY squash!): 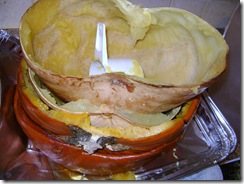 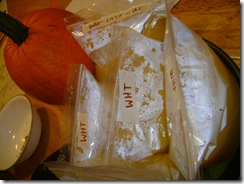 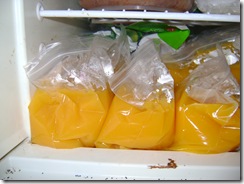 (I labelled the white pumpkin separately for experimentation purposes)