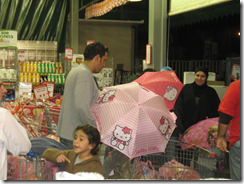 Batya at me-ander posted this beautiful picture of Israelis suddenly caught in the rain yesterday.

I mentioned the rain to YM when he Skyped earlier this evening… and he said he knew, it was raining as we were talking (he was in Har Nof).  I said, “Baruch Hashem!”

But no, it wasn’t entirely a happy thing.  While he was out biking around, he slipped and fell and scraped his elbow.

I told him he should STILL say "Baruch Hashem - it's raining in Israel!"  He didn't quite see it that way, but b"h, his elbow looked more dirty than injured.  (Yes, most of us probably would have washed it off right away, especially before getting under the sheets in a home in which we were the guest… but that is neither here nor there.)   (He was Skyping us in bed… it was after midnight, and he had to whisper.)

I thought this was actually pretty funny, because here, he rides in the rain all the time.  Snow, if we’d let him.  And then suddenly, he's an Israeli – all of his yucky-Canadian-weather instincts GONE??? :-)))

This gives me hope – may all my children adapt so quickly.