A long road to hoe… 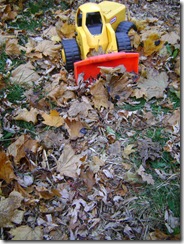 A cold, cold winter ahead, and this little bulldozer was out back doing its best to help out on Sunday.  As was I, in one of my few actual “garden days” this season.  :-( 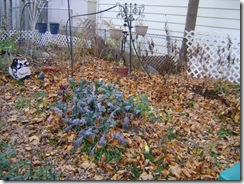 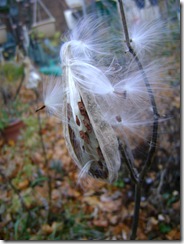 Not all the decay is a BAD thing… 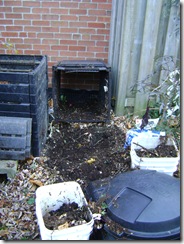 Yay for neighbours-with-bunny, who have occasionally contributed to the richness of this compost pile, which I finally got a chance to empty and distribute throughout the garden.  In fact, bunny compost is just about the only manure doesn’t NEED to be composted.  It is mild enough that it can, theoretically, be dumped (ahem, so to speak) on top of your carrots and kale, your brox and tomaters, and it’ll all just come up the richer; no burning, like with other animal stuff.  When we had guinea pigs, their waste was so ammonia-laden that it went straight into the composters and stank for ever so long.  Still – there is something ODD about tossing poo on produce and waiting only for a good rainfall to clear it before chowing down.  So into the composters it went!

There wasn’t really enough to go around (is there ever?), but one of the prime targets was the raspberry bed, which has been underproducing this season.  Hopefully, this thing layer of the good stuff will help them along a little in the spring.  I put most of it on the three square foot beds, with some on the NEW veggie bed and some on the front perennial bed, in the hope that it will do more than just irises and weeds next year. 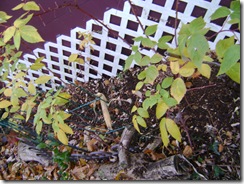 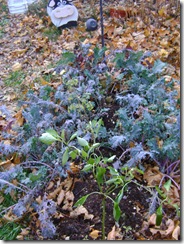 Yup – the kale is still going strong, and I am STILL not doing enough with it… sigh.  Perhaps some garlicky fried kale on tomorrow night’s pizza!

I am amazed at how tall the Emerald Cedar trees are getting, all of a sudden.  Here they are, all cozied up with their warm bed of leaves for the winter. 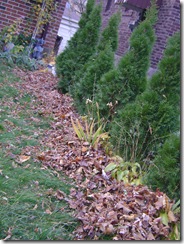 And here, in what must be the most-reused picture on this blog, here is how the trees (and Naomi Rivka) looked when I planted them in the spring of 2008. 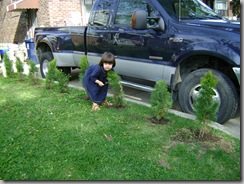 The garden has indeed done some growing this year… and I haven’t been there to see it.  I told myself it was my last “real” summer of gardening, because who wants to invest tons of money and energy on a garden they’re leaving the following summer?  Especially in this neighbourhood, where the second somebody clears out, they’re knocking out the house and landscaping to build something bigger and better.  But I may put some loving into anyway next year…