Sadly, we didn’t know they were closing at 4, but we got to see the dinos, which was a GREAT big hit.  These are like no dinosaurs you’ve ever seen before – smaller than life size, noisily animatronic and FLUFFY with feathers, per the latest research and skin-fossil findings.  Lots of fascinating questions from Naomi about the chronology of dinosaurs and the age of the earth.  I was vague and unhelpful as usual.  (my specialty!)

Then, a calèche ride through the Vieux Ville (old city), which never ceases to take my breath away with the old-world beauty and charm of riding through streets that are 400 years old.  By “charm,” I mean – of course – the thrill of blocking not one but TWO lanes of modern traffic-in-a-hurry behind a smelly horse all dolled up for tacky tourists like us! 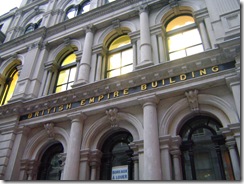 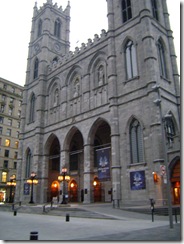 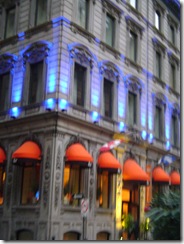 Whatever we saved on the Science Centre, we more than blew on the calèche.  I think we spent $30 last year (it was all we had) for a “bargain” quickie tour… this time, it was $48, for half an hour where the driver did nothing but shout friendly French things to people on the sidewalks he seemed to know.  He did point out that the cathedral was “very nice” and that an old building “used to be a hospital.”  Not exactly earth-shattering; I already knew both of those things, and probably could have given a better tour with absolutely no training.  Still, he was friendly enough.  And the rates are standard; you’re not supposed to bargain with them.  It’s no joke, either.  Last year, we had two drivers turn us down before we found one who’d take our $30 (illegally, presumably).

Naomi sat with her back straight the whole time, perfectly poised.  She looped her arm around the metal frame of the hood and announced, “This is how the Queen does it.”  It may well be.  Gavriel Zev was cold and frightened, but figured anything was better than the scary “not-real” dinosaurs.  What a thrill to think that, even while Laura Ingalls was roughing it in Kansas or wherever, this was already a bustling metropolis and seaport (well, river-port), gateway to the New World. 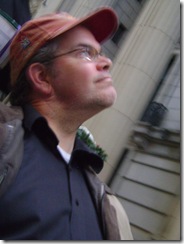 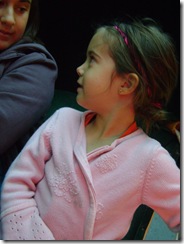 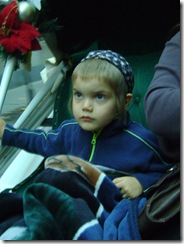 Bixi stand!  We have them here now, but the thrill never wears off… 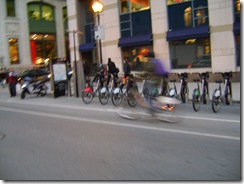 Goodbye to the horsie… 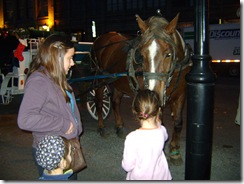 …then a quick stop halfway up the mountain to view the “giant bone,” as Naomi called it, that is the Olympic Tower sticking up over the skyline. 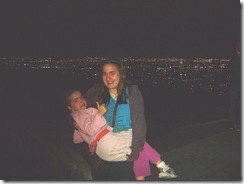 Here’s what it would have looked like if we could have SEEN it, but as it was, the city started to get dark around 4 pm: 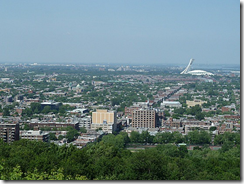 Finally, dinner at Ernie & Ellie’s and the long drive back “home” to Ottawa.

All in all (except for YM’s absence, of course) the perfect après-midi avec la famille!