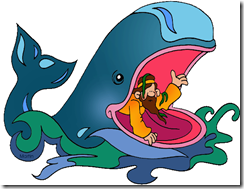 I guess we’re lucky.  The story of Yonah / Jonah, which we read in shul as the haftarah on Yom Kippur, is one area where Jewish interpretation mostly overlaps with the Christian one.  Which is why you shouldn’t be shocked to know that chinuch.org was NOT the first site I visited when looking for resources for the kids to use as we learn about it this week.

Before I show you what I did find elsewhere (gasp!), I’ll share this simple DIY booklet from chinuch.org which kids can illustrate themselves.  We used it last year and may well end up doing the exact same one this year.  It’s not breathtakingly good, but it’s not completely appalling.

Now, a few I hope to incorporate this year – depending on how much time we have this week…

As with any resources from Christian sites, please read these carefully before using them.  I am NOT endorsing these sites, merely suggesting that these materials provide useful images and  background for teaching Torah lessons.  See “Full Note of Caution” below! 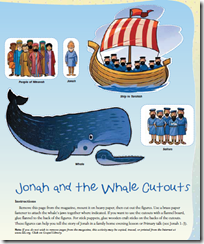 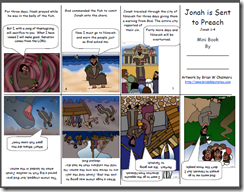 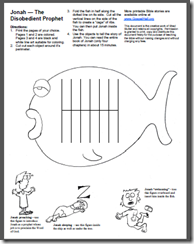 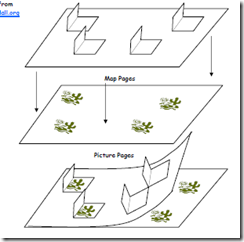 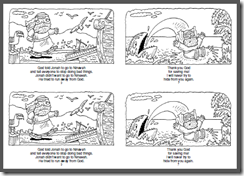 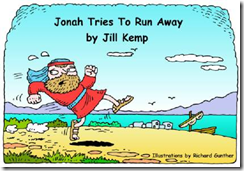 Until Jews learn to draw in a not-appalling way, this series of FREE mini-books may be just the ticket.  Most are actually available in mini-cartoon format OR in a full-colour “big book” .  These stories don’t go into specifics about what happens in Nineveh, but for younger kids, they cover the story in general.

If you want a LOT of overkill or you are VERY interested in the story of Yonah, there is a complete lapbook here that could probably adapted to use in a Jewish family.  You’d have to read it thoroughly, however, to see exactly what it needs in terms of modification, before you give it to your kids.  If you want just a few lapbook-style activities, there are some over here.

With all of these resources, be VERY careful:  even “old testament” resources (particularly the free mini-books above) often have references to Jesus; most Christians believe he is the fulfillment and purpose of the “old testament” and only study the Torah and Tanach with an eye to applying and proving the lessons of the “new testament”.  Other details in these resources, like wording and illustrations, may seem awkward in a Jewish context.

Even the most minor and innocuous

things can be “weird” in these materials – for example, in discussions of prayer, the symbol used most often is folded hands.  Bibles, in these stories, frequently have crosses on the cover, just for decoration.  And then there’s kneeling… here’s a typical “praying Jonah” from a Christian site.

This is a Jonah mini-book we probably won’t use, because there’s no shortage, and this one a) shows a Bible with a cross (in the hands of a teddy bear), it – like a couple of the others - uses the word “preach” to describe what God asked him to do, and – most importantly – it refers to the creature that swallowed Yonah as a “whale.”

Whatever you believe and however you end up teaching the Book of Yonah, please don’t tell your kid it was a whale!

If you see a picture that LOOKS like a whale, you can explain how some people thought the big fish must have been LIKE a whale, to have enough room to swallow him up.  The good thing is that if you say it’s a fish, it becomes a kosher animal and therefore allowable even in Jewish homes which don’t allow pictures of non-Jewish animals (mostly Chabad families).  Whales aren’t allowed (for that matter, neither are teddy bears; kids snuggle with sheep, cows,

Oh – one more thing I didn’t mention.  Kippahs, yarmulkes… whatever you call them, lots of the pictures from Christian websites don’t have them.  Like the one at the very top of this page.   Whereas Jewish sites almost universally show head coverings on everybody except the most wicked of non-Jews. 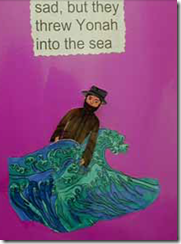 At the other end of the head-covering spectrum, of course, is this Big Book, available from chinuch.org, which depicts Yonah in a suspiciously Chassidic robe

and dress shoes, plus with a hat that is somewhere between a fedora and a Chassidic-style round hat.

Books like these offer concessions to those educators and parents who don’t want their kids to know that Jews ever looked, dressed or behaved any differently than they did, say, in Poland 100 years ago.  Now, I’m not saying that the pictures of robes and bare heads on the Christian sites are any more accurate… but, well, actually… yup, I am.

I usually DO contrive to add a kippah or headscarf to the head of most figures from the Torah and Tanach before I expose my children to them, hypocrite or historical denier though it may make me.  (judging from other middle-eastern cultures, headcovering has been around in that region for a long, long time, albeit not with fedoras)

Nevertheless, kippahs are not a make-or-break issue for me personally.  I know head covering has changed a lot in the last couple of centuries; I wouldn’t impose my own modern sensibilities and biases on the folks of three thousand years ago.

Oooh – by the way, while you’re working on Yonah, don’t forget my poem from last year!  There is also a copywork page from last year, but I may update it and/or create a new one, so check back in a day or two.