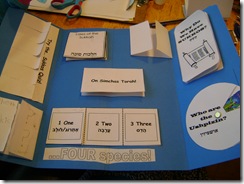 Printed out the Sukkos lapbook and we’re working our way through it SUPER fast.  That generally means I do most of the cutting.

I’m happy, though, because I always regret that there isn’t more time between Yom Kippur and Sukkos to cover it comprehensively.  At least this way, I’ve laid out the topics and we just need to work through them – quickly. 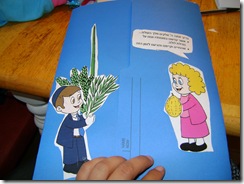 Troubling signs that Naomi has been around other kids:  she referred to the young man with the lulav as the girl’s “boyfriend” and while she was cutting him out used the phrase, “he makes me hot.”  I asked what she meant, like “hot, like you want me to open the window?” but she refused to clarify.  Has she really heard other kids, at shul or somewhere, referring to boys as “hot”???

This wasn’t my first pick for the cover, but she was adamant that she wanted these kids on the front, and I think they look good there, so fine. 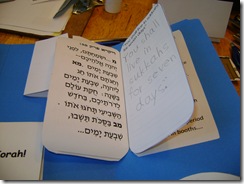 I think this sets a record for world’s smallest copywork; 4 words in Hebrew and 7 in English.  But the booklet format looks good!

And I love this flip-flap format for the laws of the sukkah.  Everything fits perfectly, with room for a tiny drawing. 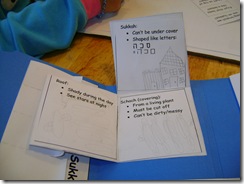 When is Sukkos?  I was going to cut out the calendar and paste it in the middle, but then I realized I didn’t have to and I like this little stand-up calendar even better! 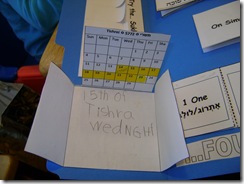 This is what we’ve got done so far… Naomi chose the “quiz” questions on the left.  We haven’t done Simchas Torah or the Lulav / Esrog counting yet, but I’ve pasted the bookies in to save their spaces. 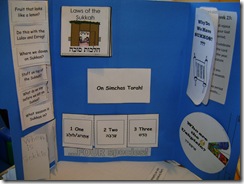