It hasn’t changed much from previous years, BUT this year’s improvement is the snugness of the roofbeams.  Confusingly, the north-south wooden beams ARE the actual schach – schach does not have to be green, but merely have grown from a tree and never have been used for any other purpose.

BUT the schach cannot be nailed down, so the wooden beams are held in place snugly by pieces of wood on the frame.  Last year, this innovative and exciting design resulted in two guests getting conked on the head by fairly light wooden beams, and on one particularly windy day, having to eat inside for fear guests or their babies would be seriously hurt.

THIS YEAR, Ted added cross beams that ensure that even if the “schach-beams” do fall, they only “fall” onto the cross beams and never actually have the chance of landing in your soup.  Plus, it’s been so rainy that all the wood supports are swollen, so they’re clinging tight to the schach beams.  All in all, a very lovely sukkah indeed!

Front view – occupying the entire width of our driveway, between our house and the neighbours to the south: 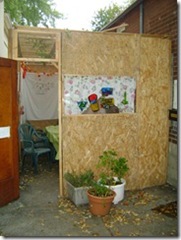 Coming in the front door:  (there’s some spare greenery “schach” on top just for the nice effect…) 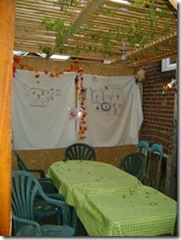 Bedsheets with Sharpie on them, from years ago: 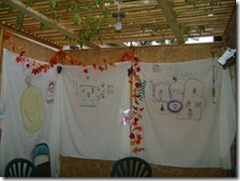 Here’s the inside view out through the front door: 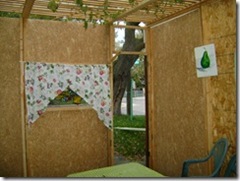 I love this window!  Ted added it last year, and between the clingies we’ve made and the curtains, it totally makes the sukkah feel like home: 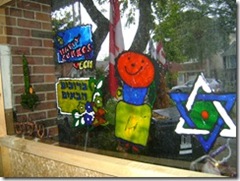 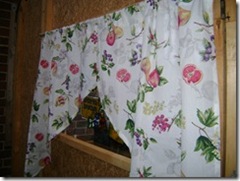 Naomi’s addition this year:  at Ted’s suggestion, she made signs for the inside and outside of the door, complete with diagrams of how to use the door correctly from that particular side. 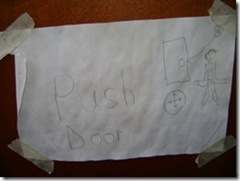 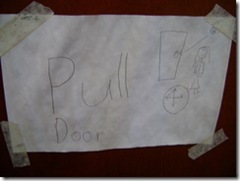 From year to year, I keep forgetting how much I love Sukkos… it doesn’t get the hooplah that Chanukah and Pesach do, and that’s a shame.