In the interest of making our teenagers look even more awkward than their hormonal surges ordinarily do, they now sell something called the Breffo Spiderpodium that was, apparently, at the top of Big Boy’s birthday wants list.  Did I mention he had a birthday???!  Yup, that’s seventeen years of Mama-hood… but who’s counting?

And you know what they say – “the first forty years of parenthood are always the hardest.”  Okay, I only just read it 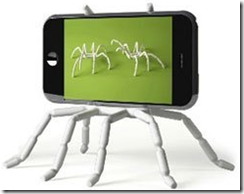 for the first time on a fridge magnet last Sunday, but I bought the fridge magnet, because it’s funny, and maybe it’s true.  Also, the fridge magnet was only $1.50, less than a TENTH of the Breffo Spiderpodium.  Here’s what it looks like when it’s not clinging to my teenager’s undershirt:

So is it mean to use the word dorky to describe my own son?  But really, it’s not him, it’s the gadgetry hanging from his neck.

Which isn’t REALLY what it’s meant for.  He bought it for its ability to connect his iPod to anything, anyway, most especially the handlebars of his bike.

You may recall that, back in May, I was trying to drum up (beg) donations from readers for a bike ride he was hoping to do in Israel… well, with some help from my mother, he made it all the way to $2500 (don’t say a word or I will cry) and is heading off to the Holy Land next week, iPod and Spiderpodium in hand to roll around for 5 days on his bike with his best friend Elijah.  He’s also planning to check out a couple of yeshivas while he’s there.

I’m not at all worried about him.  Partly because he’s going with another parent from our shul, but mostly because he has an amazing built-in navigational sense.  I have every confidence that you could drop him off at just about any level spot on the globe and he’d be able to find his way home in under 24 hours.

As for his globetrotting Spiderpodium, I’m actually quite impressed, because I think bought it with a birthday Amazon gift card from his Grandma, and he only ordered it on Sunday.  The fact that it arrived today is quite amazing.  But the fact that they delivered it at ALL is triply amazing, because I’ve never found anything on Amazon other than a book, in the most literal sense, that they’re willing to deliver in Canada.