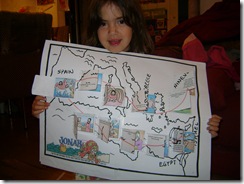 I provided a link to this map project / activity for the story of Jonah / Yonah, which is read on Yom Kippur, but I wasn’t sure if we’d have a chance to do it.  But yesterday evening, we did have some free time, and I printed out all the bits and pieces so we could laboriously assemble them.  I used 4 pieces of cardstock for the “underneath” layer, and 4 pieces of paper, taped together meticulously, for the top layer.

We were ALL very pleased and impressed with the results!  Each little “door” has a number and one small part of the story, so you can read the story, open the little door to see the full-colour picture, and then follow Yonah along his (hypothetical, because nobody knows for sure) route from Yaffo to Tarshish and then back to Nineveh to do what Hashem asked him to do. 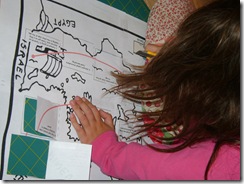 Naomi was thrilled because I let her use the X-acto knife for the first time – ON the cutting mat, with her other hand well out of the way!

For some reason, all the non-Jewish sites say the big fish (NOT a whale!) “vomited” Jonah onto dry land, whereas the Jewish sites say it “spit him out.”  I prefer “spit,” and that’s the way I read it, however it’s written on the page.  Frankly, GZ giggles himself into fits just hearing the word “spit” – I don’t want to conjure the spectre of a nauseated hurling sea creature.  Blah. 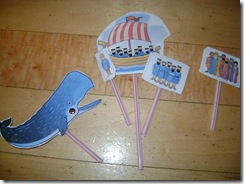 Oh – we also made these cute straw-mounted “action figures,” (repeat after me – it’s NOT a whale!) which Gavriel Zev promptly took off with and now the little tiny Yonah is missing and will probably not resurface until Pesach…

But we managed to use them for a while and have read through a couple of versions of the story.  Fun!