Preliminary report:  So far, so good!

It’s getting done, and the kids (well, Naomi Rivka) are enjoying it.  But we ran into our first roadblock two days ago – well, our first if you don’t count how DRY the first chapter is (which I knew already – other parents warned me, but said that once you’re past that, it gets AMAZING fast). 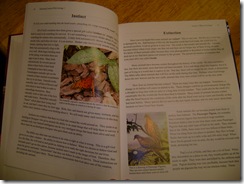 Here’s the problem:  the words INSTINCT and EXTINCTION, both brand-new to Naomi Rivka, are introduced on basically the same page of the book.  See it here???

So now Naomi Rivka is totally mixed up.  I helped her through the narration, so she did that properly, but I doubt very much that she remembers now which is which. 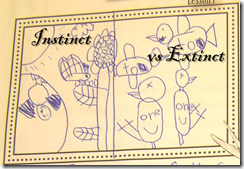 Luckily, I posted this problem to the wise parents at the Well-Trained Minds forum, looking for a quick, helpful mnemonic, and one mama had a great suggestion:  “eXtinction has an 'X' in it, which you can show as being a sign for crossing out something.”

Which immediately brought to MY mind the little X’s that people draw in the eyes of creatures that are dead… like Naomi Rivka has JUST learned how to do!  She did it, in fact, on this narration page where she drew a few “extinct” birds, marking them with X’s.

I’m so excited; I want to go wake her up so I can tell her about the X’s, but it’s midnight and I doubt the seeds of learning would fall on fertile soil.  :-)

Meanwhile, confusion or not, dry text or not, she likes the “official” look and feel of the narration / notebooking journal, although in my opinion, the coil binding doesn’t give us much room for creativity (I’ve stapled our science vocabulary sheet inside the front cover, but I suspect it’s going to get bulky there). 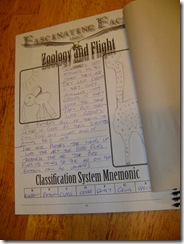 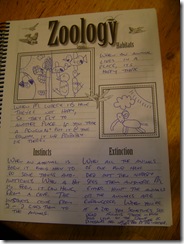 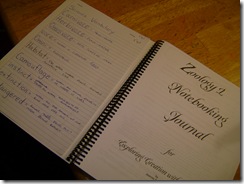 And what I love is not having to figure out ways to INSERT Hashem (God) into the curriculum – He’s already there!!!  So when we talk about instincts, we don’t have to wonder how the animals know how to do certain things, even right away at birth.  They are automatic, because Hashem put them there. 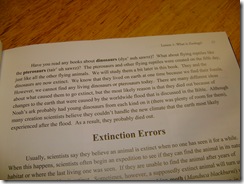 That said, this page ALSO points out that “the most likely” reason dinosaurs died out is the worldwide flood of Noach.  Uh-huh.  Well, I didn’t say “most likely,” and I skipped that sentence and segued right into the bit about the climate changing.  And then went to the library to get a more conventional book about dinosaur extinction.  I knew I would have to edit, and I’m not upset or disappointed, though I can only imagine how horrified a younger version of me would be to see such a thing in a science text.

I don’t know why… somehow, I’m happier editing OUT what I feel are extreme (“young-earth” Christian) Creationist references than I am editing IN the God references that are so central to my own belief system.  Texts without Hashem in them, science without Hashem in it, somewhere, just feels… well, empty.  So that’s why I’m enjoying this book so far.