I just turned around and discovered that the box Gavriel Zev was playing with had been plastered with labels: 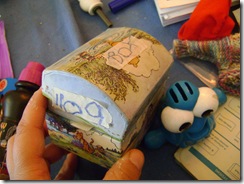 It says “Pull Box”.  Apparently, his ladybug wanted it to say that and actually wrote the words… but the ladybug didn’t want to be in the picture, so the blue monster offered instead.

He cut off lengths of masking tape with scissors and wrote the words all by himself without any prompting!!!  This from a kid who only just picked up a marker voluntarily for the first time a month ago… (yes, we have done SOME writing together, but it has always been reluctant and slow, with nowhere near the sophistication of these letters he drew himself) 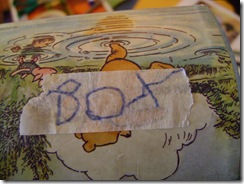 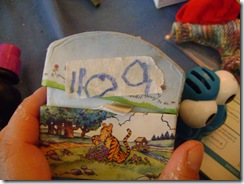 It’s ALMOST enough to convince me to unschool – or even neglect my children outright.  Turn my back for 15 minutes to get some work done, and see what they come up with!!!

Naomi Rivka is out with Ted at an animation workshop… I imagine they’ll be home pretty soon, but in the meantime, we’re having a quiet mama-and-two-boys morning.  (one small boy playing, reading, having fun… and one big boy mostly in bed with his iPod)