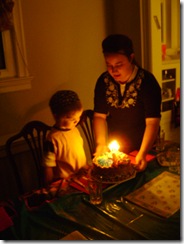 I cried when they blew the shofar after Yom Kippur.  Though he wasn’t born until late Sunday afternoon, it really DOES feel like the moment of his birth. 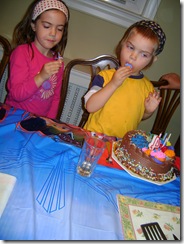 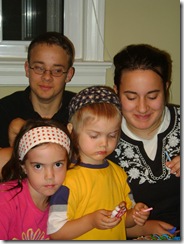 Yum!  Low-key family party:  no aunts, just us and bubby. 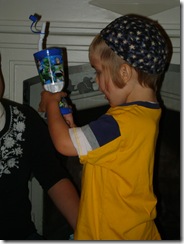 If anniversaries like 25 can be silver and 50 gold, the 4th birthday MUST be the “year of licensed merchandise.”  Most of his gifts have either Woody, Thomas or one of his friends from Cars. 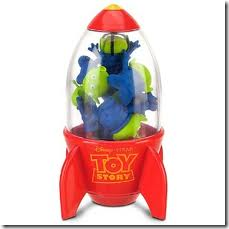 He just loves them SOooo much.  More than any of my kids ever has, he adores every single thing about each of these prefabricated story worlds.  Downtown with my mother yesterday morning, we stopped in at the Disney Store – my first time going ALL the way in (I’ve peeked in and fled before).  They had this cute rocket full of erasers (I figured we just wouldn’t tell him they were erasers and he’d run around screaming and playing with them).  But it was my mother’s gift to him, and it cost $16 and I eventually told her NOT to buy it.  She got him a hoodie instead, which he loves and will at least, for a few dollars more, serve some practical purpose.

She also gave “him” a family  Science Centre membership, for which I found a coupon code, so it only cost us $99 instead of the regular $120.  I was inspired because I was trying to buy tickets for chol hamoed and realized it would cost over $130 just for us to walk through the front door.  Membership also gives us 50% off Imax tickets – yay!

So it wasn’t a total brain-melt of plasticky crappola.  Plus, there were also giant 99-cent (Shoppers Drug Mart) slinkies, matching girl’s and boy’s to keep Naomi happy and keep me satisfied that their minds are not going to completely rot. 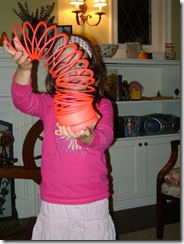