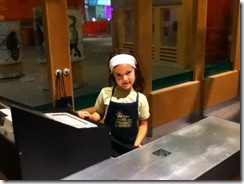 We’ve received a Toronto Zoo membership as a gift for the last few years – usually around Gavriel Zev’s birthday.  Family membership at the Zoo is $145 – at the Science Centre, $120.

We used our Science Centre membership for the first time today, and there are some really nice differences.  At the Science Centre, your membership gives you 50% off parking, 50% off the Imax movies, plus a discount in the gift shop (I think 10%).  At the Zoo, you get 10% in the gift shop and nada elsewhere, though they do mail you a $2 parking coupon in their newsletter a few times a year (parking has gone up by $2 every year; it’s now $10 or 12).

At the Science Centre, somehow, they made us feel like VIPs – offering us free tickets to the new Da Vinci exhibit, for example, or giving back half the price YM paid for his Imax ticket because he arrived late (changed his mind and came on his bike) and didn’t have the membership card with him.

Of course, at the Science Centre, you can’t see animals, and at the Zoo, you can’t see various science-related exhibits n’ stuff… but after a few years of free access to the zoo, I think we’re ready for a change.  Plus, today was a chilly day – it was kind of nice to be paying for the tickets while standing indoors in warmth and artificial lighting.  :-)

The newest Imax movie is “Rocky Mountain Express,” which was somewhat exciting, despite repetitious shots of the front of the train and perhaps too many “train-in-motion” scenes.  It also kind of glossed over the death of hundreds of Chinese (and Japanese, which I hadn’t known) railway workers – truly one of the ugliest blights on Canada’s reputation for niceness.

Gavriel Zev spent the whole movie curled in my lap with my hands over his ears, peeking at the screen out of the side of his eyes.  Not one for sitting still OR being quiet, he still hasn’t been to many movies in his four years.  Still – the rest of us liked it.  A fascinating and dramatic Imax movie about Canadian history; how many of those can you find out there???

I like to think the movie was especially meaningful for the big kids, whose grandfather worked on the trains as a youth, almost 50 years ago.  To celebrate a big birthday last year, he brought them home from Calgary by train, a thrilling 3-day journey.  My parents also did a romantic Rocky Mountain train trip a few years ago.  The movie kind of makes you feel guilty for taking trains, though… so many people died – so I could take a vacation?  Better you should hop on a plane!

Anyway, a few other highlights:

The ballies / sculpture that go round and round… (mostly kid-powered) 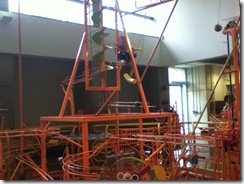 “Trying on” spacesuits – me and Elisheva 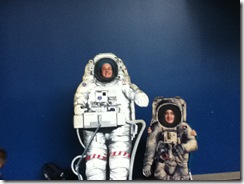 Elisheva got roped into “cashiering” at the little kiddie supermarket.  What this has to do with science, I have no idea, even though they do have free brochures you can take home about Canada’s Food Guide. 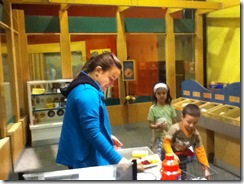 I seriously doubt that we did much there that had anything to do with science.  Do they take home valuable lessons and insights about physics from rolling balls around or playing with sound waves, anatomy from putting together a skeleton, immunology from the super-weird “sneeze machine”, or biology from spinning around various animals’ heads and bodies to create fascinating chimeral creatures?  Um, I doubt it.

To the kids, as it was to me at their age and even into adulthood, it’s basically a playground.  But a good time was had by all 6 of us, young and old, and that in itself is a rare enough thing these days.