This is a Story of the World history project.  On Monday, we made little teeny clay “bricks” and yesterday, they were dry enough to build the house – except we didn’t have very MANY bricks.  Drat!  Note to self:  it takes hundreds of bricks to build an entire civilization.  We had to content ourselves with building one, unambitious little house. 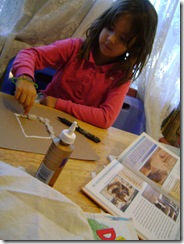 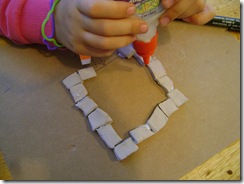 Building it up, layer by layer (note to future brick-making self:  one advantage of building with bricks over building with rocks is their uniformity of SIZE and SHAPE): 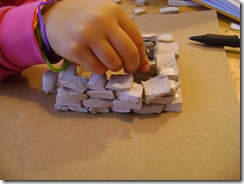 Done!!!  Naomi built one little covered “privacy” room and there’s also a removable, 3-sided “potty seat” made of three small tiles glued together.  This was her idea because, of course, the most fascinating thing about the Harappan civilization of the Indus Valley is the fact that they had the idea of going to the bathroom INDOORS (in what our book describes as “jars” – ew!). 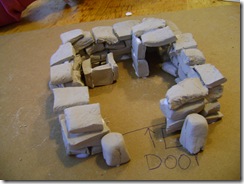 Time to test it out!  Look around the neighbourhood… 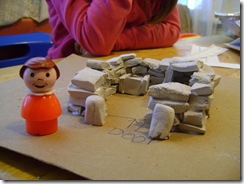 And then test the “facilities”! 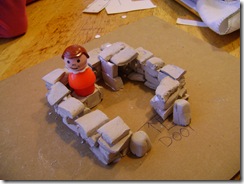 I’m not sure if either of us learned anything through this exercise, but I *did* have our “Mohenjo-Daro” book open on the table while Naomi worked on this, so at least she got to see pictures of what the real houses actually looked like (a bit better than ours, I’m afraid, but I’m sure the occupants were nowhere near as cute).