BOB Books, the Next Generation 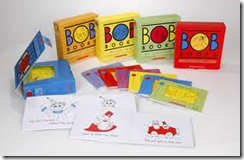 Once I saw how desperately Gavriel Zev wanted to read, I hauled out the BOB Books from where I had put them away, out of Naomi Rivka’s sight and mind.

Don’t get me wrong – they WORKED for her, but at 4 and 5 years old, they were NOT what she wanted to be reading.  She disliked the flimsy, staple-in-the-middle format of the books (“that’s not a REAL book!”), she disliked the handwritten look of the things, she disliked the weird illustrations.

Which is why Gavriel Zev’s reaction has been such a surprise: he ADORES them.  He takes them out every chance he gets.  He waves them around!  He offers to read them to anybody and their uncle who happens to be passing by! 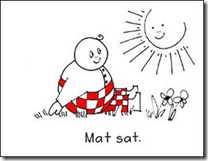 (another difference from Naomi Rivka, who still won’t read in anything above a whisper if she thinks somebody is listening)

One big difference:  he even adores the stupid adventures of the characters and the odd humour that comes from every character ending up sitting on a bag or whatever object is at the centre of the “story.”  He rolls around laughing as he reads them - “he’s sitting on a BAG!” 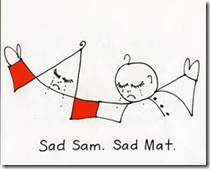 I’ve never quite understood how homeschool parents who loved a particular curriculum for one child can just ditch it for the next kid.

Googling BOB Books, by the way, I noticed there’s now an iPod app, in full colour, which seems to have cleaned up the weird graphics of this series a bit… at least, to the point where they look like they were drawn by somebody with a little experience drawing.  I don’t know if the images have been updated, or if they have just been skillfully filled in with colour.  Either way, I bet Naomi would have liked these BOB Books a whole lot more. 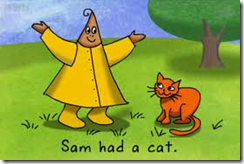 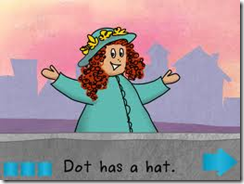