The Beckoning of the Woods 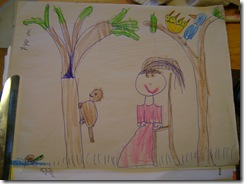 Despite a 30% chance of rain (which, by the way, means a 70% chance of NO RAIN AT ALL), today was a PERFECT fall day.  Sunny and absolutely, flawlessly, picture-perfect.  Which is GREAT, because I picked this day over a month ago as our first field trip of the year to the Humber Arboretum.  And I invited a group which turned out to be 42 people, all-told… so I would have been extremely peeved if we’d had to trudge around in the rain and muck.  But we didn’t!

The woods and meadows were definitely calling to us, and today, we answered.

I love homeschool groups!  The kids’ ages ranged from a couple of months to 12 or 13, and everybody participated as much as they could.  See the range of heights?  I love it!  There’s so little cynicism in the older kids - “that’s baby stuff!”  And the littler ones are challenged – by the long walk, by the challenging material, and the questions and comments of the older ones.  Mine are the ones in the bright yellow raincoats… I just couldn’t shake that “30% chance of rain” out of my head.  Plus, they are WARM raincoats, and in the shade, it was still a chilly fall day. 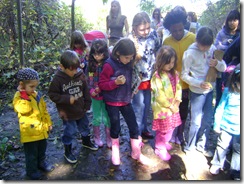 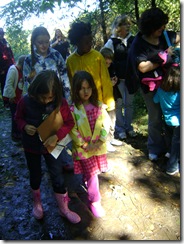 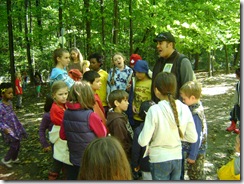 Yes, we have milkweed in our own backyard.  I don’t think he would ever pick it up with such fascination if I just went back there and handed him one.  It first needed the pixie dust of the teacher and big kids’ attention and all of a sudden, it was MAGIC. 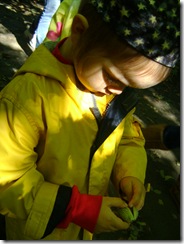 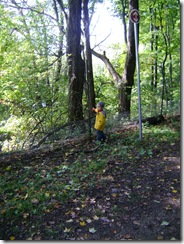 Quick lesson in poison ivy (aka Toxicodendron radicans).  Not just “leaves of three” but “leaves of three atop a leafless viny stalk, with one leaf bigger than the other two, trying to get away from them.”  I may actually have a chance of recognizing it someday.  Pretty stuff, innit? 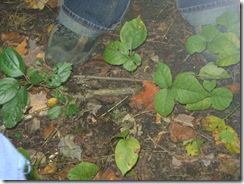 Finally, the crowning moment in our “animal tracking and signs” class – actual deer hoofprints!  (see them?) 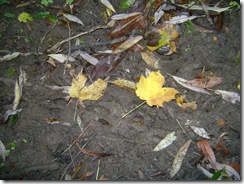 I know, I know… in some parts of North America, deer have become such a menace that they are no longer cute and friendly like Bambi’s mother.  But here in Toronto, they are still an extremely rare sight, and it’s still a treat for kids to see footprints and believe that they are a wonderful gift of nature.  Sort of like people do about raccoons in places where THEY are not the urban menace that they’ve become here.  One region’s “cute n’ cuddly” is another’s “garden/garbage eater.”

As always when we come home from Humber, I tell myself we will go back WITHOUT a teacher or guide, because the one downside of doing it as a formal program is that the kids have to a) walk too far and b) walk too fast to keep up, even if there’s something interesting they want to look at (which is partly why they’re not in SCHOOL, darnit, but on a field trip, there isn’t much way around it). 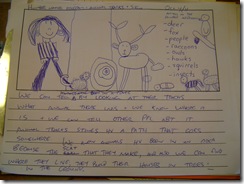 So maybe… maybe we’ll go up there during Chol HaMoed Sukkos, if the weather is nice, just us, with Abba along, and show off these woods we have come to know so well, in three different seasons.

Naomi came home and did not one but TWO illustrations – here’s her first, and the second, in full colour, is up above.  She was very pleased with this one.  Apparently, Ted already showed her how to draw a deer… you can tell she’s had pointers on drawing this kind of mouth, because it’s not just the usual happy face she plasters on everything from elephants to pythons (okay, she’s never drawn a python, that I know of, but you can see what I mean on the faces of all the creatures but the deer).