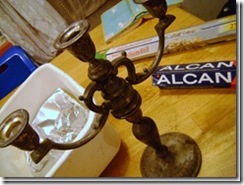 … as a shoddy housekeeper, that is!

Our only REAL item of value, beyond the miscellaneous computers and electronic whatsits sitting around, is a pair of silver lechters, candlesticks that were my grandmother’s.  For some reason, she left her main, brass ones, to my mother, leaving these super-amazing Birk’s sterling pair for me (though not explicitly TO me, my grandmother had only one daughter).  I love them very much.  There are two bases that can each hold a single candle, OR you can put in the inserts, which hold 3 candles each, for a total of SIX… exactly the number I light every Shabbos.

But they’re silver, and I have a really REALLY bad track record with silver.  For years, Elisheva has been asking me if she can polish them (I keep saying yes!).  So they have gotten really black and dusty and waxy and disgusting. 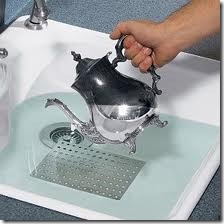 Sometimes, at fairs and in infomercials, they try to sell you a handy-dandy “tarnish plate” that magically – without dangerous or effortsome silver polish – transforms your dingy silver to like-new condition.  Only my mother told me years ago that it’s not magic, it’s ALUMINUM.  Aluminum of any kind, including tinfoil, plus borax, plus hot water, equals an electrochemical thingamajig that strips away the layer of tarnish, revealing the true whitish-silvery beauty beneath.

(Sometimes even TOO much beauty – sticklers will tell you that this method removes even the tarnish in deep grooves and engravings, which gives silver its character.  To which I say “Ha” and carry on.)

So over the summer, I assured my mother that I was working on getting the lechters all polished up.  I wanted her to know I cherish them… and not just know by seeing me light my Neronim in them every week, but KNOW by seeing the love.  But – aha – the catch was that Ted couldn’t find Borax anywhere.  He rarely can; it can be tough to find in stores here.

So a week later, my mother showed up with a big box of Borax.  Thanks very much… for this End to my Lazy Excuses.

Well, then I broke my ankle (actually, someone else volunteered to do it for me).  Hurrah!  Another excuse!

But now the ankle is healed (if super-painful and unable to walk in bare feet = healed!) and the lechters are still gross.  And tonight, inspired by Elisheva’s attempts to polish up a silver bracelet, I decided to take the plunge, and sent her out into the nearly-freezing rain to retrieve a great big dish basin from the front lawn.

Above, you can see the “before” state of the lechters.  Open them up to see the untarnished colour! 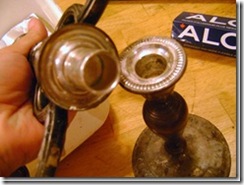 I decided for the sake of science and ongoing laziness, to only clean ONE lechter, so I could enjoy the delightful contrast.  I placed a few flattened doubled-up pieces of tinfoil into a basin and filled it up with hot tap water…then made it SUPER hot by adding boiling water to cover the lechter. 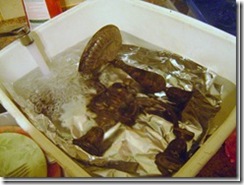 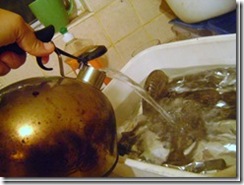 In the end, I actually decided NOT to use Borax.  Everything I read online suggested that baking soda was actually the tried-and-true thing… so, nervous about going against my mother’s advice (and hoping she wouldn’t find out that after all the effort of buying us Borax, all we were going to use it for was laundry), I dumped in about two cups of Arm & Hammer.  Bubble, bubble! 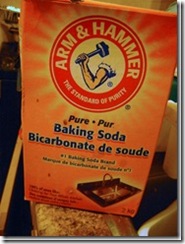 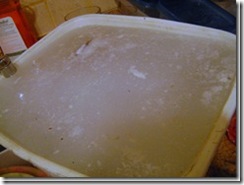 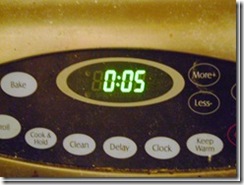 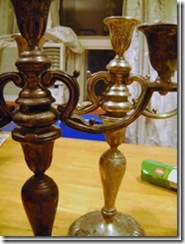 The shiny silvery new-looking lechter is in back because Elisheva suggested it looked “funnier” that way.  (all my pictures show the nice one in front).  Hope everybody’s getting a good laugh.  The truth is, even the “polished” lechter is still a bit blotchy and funny-looking, which can probably only be fixed with good old-fashioned silver polish.  But I think we can all agree that it’s a definite improvement!!!  And no, as of this posting, I still have NOT done the second one.

Maybe I’ll do it when the kids are awake so they can ooh and ahh at the impossibility of – well, something dirty getting immersed in hot water and coming out clean.  I guess that doesn’t happen often enough around here!