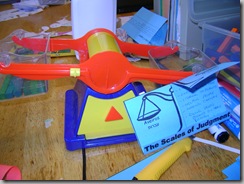 We’ve done a few more bits and pieces on the big Rosh Hashanah Lapbook since I took these yesterday, but I haven’t taken pictures yet.

I thought it was fun to demonstrate the symbolism of the scales (in Hebrew, moznayim, the zodiac symbol for the month of Tishrei) with the ACTUAL trusty bucket balance, while we had it out for math. 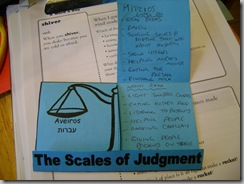 This scale one of the first homeschool “accessories” I bought, and it has served us well for many purposes, but this was the first time it has helped transmit a SPIRITUAL message.

I used Cuisenaire green rods (I like green!), and had the kids name mitzvos and aveiros to stack them up on both sides of the balance.  They could say whatever they wanted, but if it started to tip too far to the “bad” side, we’d have to think up mitzvos to balance it out and tip it the other way.

I tied this in, somewhat, lightly, with the idea that we all make mistakes from time to time, and Hashem doesn’t condemn us (luckily!) for making them.  On Rosh Hashanah and Yom Kippur, he looks at how we live our lives ON BALANCE.

Gavriel Zev helped think up some pretty silly examples, but I tried to write them down as long as they were appropriate.  Like, “helping Mickey Mouse.”  Sure, that’s a mitzvah!  Why not???  And… um… “eating the parsha.”

Well, I was feeling generous, and he was feeling sniffly, so again, why not?  Maybe he’s seen the Parsha Cakes blog…!