Math Out Loud! with The Verbal Math Lesson 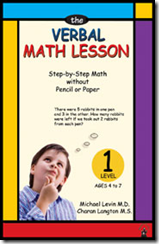 Last year, when we started doing formal math, I immediately noticed that Naomi’s handwriting wasn’t in the same place that her “math brain” was, developmentally.

She could DO the math, but we were both frustrated by her number reversals (to the point where they were unreadable), both mirror images of the numbers and switching the place values (so 21 might be 12, with the numbers backwards).  We actually took a break from formal “handwriting” math so her fine-motor skills could catch up a bit.  And it was fine… we played with rods and did other mathy stuff until she was ready to keep going in the Miquon books (and soon, into the JUMP books).

I found out today (procrastinating – or rather, taking a break from endless Rosh Hashanah cooking!!!) about a program called The Verbal Math Lesson, available in physical or eBook form, which offers parent-led, somewhat scripted lessons to supplement a regular math program – or, perhaps, to fill in at times like the one we went through last year, when handwriting is an obstacle to math enjoyment.

In fact, one of the things I mentioned last night when I wrote about Life of Fred: Apples is that although the “Your Turn to Play” problems at the end of each chapter are meant to be written down, many are fine to do out loud, and that’s completely the point of the Verbal Math Lesson books.

As the book says (read a sample from Book 1 here), there is no writing needed OR ALLOWED in these lessons.  So the book should probably be called “The ORAL Math Lesson,” since “verbal” includes both written and spoken language.  But that’s a minor nitpick (well, there IS no minor grammar nitpick as far as I’m concerned, but that’s only because I lack all sense of perspective).

(and actually, funnily, the company DOES provide a few free worksheets – as they say, “if you must”!)

The lessons in the book ARE word-based (definitely verbal), but they’re based on telling your child the problems and hearing his or her responses.  From the sample, it looks like all the solutions are provided in line with the questions (because you are the one looking at the book, NOT your child).  The lessons remind me a bit of First Language Lessons, only for math; they’re also reminiscent of old texts like Ray’s Arithmetic – except these problems are not supposed to be written down.

I have only seen a sample of this program, but I love the idea of putting the pencil down and, like the kid on the cover of the book, just THINKING about math.  I’ve been forcing myself to do this with recipe calculations for about a year now, multiplying and dividing 3-digit weights of dough, mostly by twos, threes and fours, and I think it’s really helping, and would REALLY help kids who are just coming at math for the first time.

So I definitely think this program worth checking out as a supplement to what we’re already doing.  One parent mentioned that it’s a useful book to bring along so you can fit in a quick “math time” with your child wherever you happen to be.  And the reason I mention all of this here is that the Verbal Math Lesson information page promises that if you blog about the book, they’ll give you a free one of your choice (eBook only!).

SO… I’ve held up my end of the deal; if they send me the free eBook, then sometime after the chagim I will hopefully have a chance to let you know how the program works in real life!