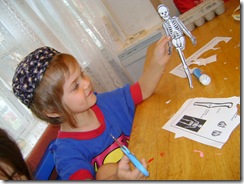 (I discovered this cool cut-apart skeleton in the sample pages for Pandia Press’s Real Science Odyssey, Life (Level 1).  You can download the full sample here, if you’re interested.  See below for why I was looking at science curricula (hint:  I bought a new one, but in the end, it wasn’t RSO).

We drew… (ugh, the strange-looking BOY made from the word “boy” in Draw Write Now, Book 1 – I have been dreading this lesson for months, but at least it’s over now and we can move past it) 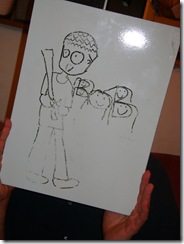 We learned Chumash…  (see how much she HATES colouring things in???)  (but she does enjoy colouring the “leftover” words with a rainbow pattern even though it takes forever sometimes for her to fill them in).  The book she’s using is Bright Beginnings. 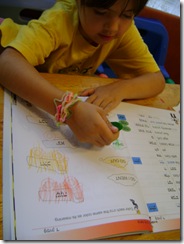 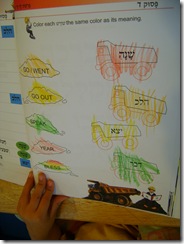 …And SO much more!

We are doing and ENJOYING the following Evan-Moor daily worksheets, which I print off from TeacherFileBox:  Daily Science, Daily 6-Trait Writing, Daily Word Problems, Word a Day.

Also, thinking of adding this one next week:  Daily Language Review.  Some overlap with First Language Lessons, but overall, I think these “daily” segments are fast, easy and fun. 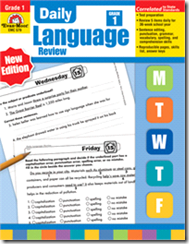 We started doing this one but didn’t enjoy it:  Daily Geography, Grade 1.

so I am substituting pages from:  Beginning Geography, K-2.

The daily math word problems started out super-easy at the beginning of Week One, but now, by the end of Week Two, I think Naomi can see that they will be right at her level very, very soon.  And it feels like a good complement to the LACK of wordiness in Jump Math.

Our JUMP Math was kind of all over the place this week.  I suspect its having to pander to multiple provinces’ curriculum requirements means that the threads are a little more choppy and discontinuous than if the authors had their druthers and could just carry on teaching math.  It seems like every other day we’re onto something new right now.  I’m not loving it, but the variety is keeping Naomi Rivka on her toes…

Other basics:  carrying on through Handwriting Without Tears, Explode the Code and First Language Lessons.  Those are all going just fine, though ETC is causing some frustration now that the phonics rules are getting slightly harder.  Fine with me, and she doesn’t seem to dislike the challenge, so far… 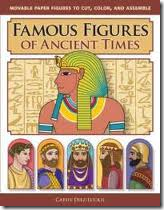 In Story of the World history, we read about Babylonia and made Hammurabi from Famous Figures of Ancient times – though I seem to have utterly failed to take a picture – sorry!  Naomi actually agreed to colour the black-and-white Hammurabi and cut it out herself; I did the full-colour one, so, like Narmer, we now have two Hammurabis.  Now we need to do the corresponding readings in Child’s History of the World (Hillyer) to “catch up.”  So far, Naomi seems to like the style of the Hillyer book more than SOTW – it’s more conversational – but they tolerate either one just fine.  I wish there was a book like Hillyer which focused only on Ancient history. 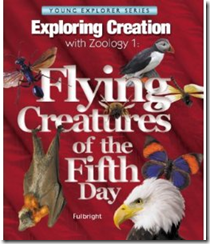 On a downer note, this was also the week in which, despite my best intentions and enthusiasm, Elemental Science has crashed and burned for us in the takeoff stage.  I have ordered Apologia Elementary Science, which should do the trick nicely in a more Charlotte-Mason-friendly way.

The first volume is Exploring Creation with Zoology 1, Flying Creatures of the Fifth Day.  I know it sounds ominously Biblical, but I’ve been told there’s nothing TOO objectionable in there for Jews who believe in God.

Oh – we also did the last nursery rh

yme in the Literature Pockets: Nursery Rhymes.  Yet another Evan-Moor product which I have LOVED.  The units are easy to do and the kids love memorizing the easy “poetry”.  Not sure yet if we’ll continue with Nursery Rhymes or move on to something like the Fairytales pockets.