Back to… Hebrew and Chumash

We’ve been doing bits and pieces over the summer, but nothing really systematic, and it’s always tough  getting back into the groove when you’re grooving in a whole other language.

Slogging through Kriyah v’Od, and it really DOES feel like a slog sometimes.  The way the book substitutes images for words is starting to annoy both of us, because she is regularly grappling with ALL the nekudos (vowels) in our Chumash studies. 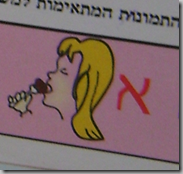 Kriyah v’Od uses pictures for any word containing a vowel other than shva, chirik, kamatz and patach (basically A & I).  Here is the word “ochelet,” for example.  Because it has “o” and “e” in it, they use a picture instead, cued with the letter alef (meaningless because it’s silent, but perhaps it will help her spelling later on down the line). 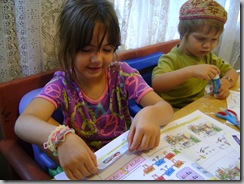 Still, it was an exciting day, because we got to use the STICKERS!  There are so few sticker activities in the book that it makes me wonder why they even bothered, but I ham it up and do a big drumroll and announce “Sticker Time!” for the two stickers we get to a) cut out from the back of the book and b) paste into the correct spot on the sheet.  A waste of time, really, because the two stickers read “aviva ochelet g’vina” (aviva eats cheese) and “tzvi ochel anavim” (tzvi eats grapes), and because the words “ochel” and “ochelet” are shown as pictures, she basically just had to match the pink GIRL picture with the GIRL sticker and the blue BOY picture with the BOY sticker.  Duh. 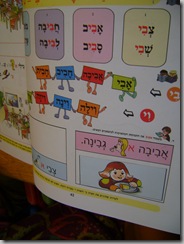 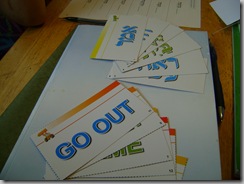 After an inspiring tale about a tzipor (bird) in the kitah (classroom), we moved on to Chumash.  I cut out the flashcards that came with Bright Beginnings, and used the first eight of them to drill her on the most common nouns and verbs.  She wasn’t at all familiar with most of the verbs, so I did it Montessori-style, ie “cheating,” where I hold it up and say “amar – SAY.”  Time enough for her to say them back to me later on. 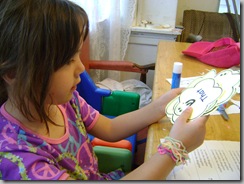 Then, some work with our homemade “prefix popcorns” in L’shon HaTorah.  She resisted the popcorns mightily at first; she barely wanted to look at them.  Now, they are old friends and she enjoys lining them up and decoding each Hebrew word in turn.

To be honest, it frustrates me to see her slowing herself down with a manipulative 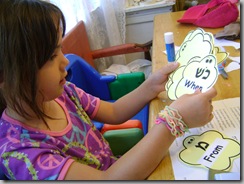 like this when she KNOWS that ה is “the” and probably that ל is “in/with”, and ו is “and.”

I know she KNOWS them because when we read them in Kriyah v’Od, she has no trouble at all understanding them.  But for some reason, in Chumash, she needs to look at them… slowly…. one at a time.

Finally, we wrapped things up with a cut-and-paste sheet for passuk gimel (verse 3 of parshas Lech Lecha), which is where we’re up to right now. 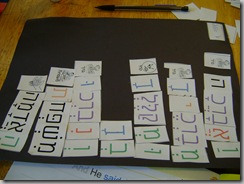 The pace is mind-numbingly slow – three pesukim since June – that’s one a month.  Again, though… so be it.

I know it will pick up a bit as the concepts, vocabulary and shorashim (roots) sink in.

I like these cut-ups very much (if I say so myself!), because they teach very kinesthetically that even the LONGEST word (like וממולדתך, “and from your birth place,” in Passuk 1) can be “broken down” into a small shoresh, with a few tiny add-ons.  I have to believe the little icons I’ve created for each shoresh also help.

If you’d like to try the cut-ups yourself, they are available as a PDF here (scroll down to find the link) for the time being.