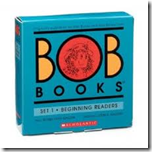 So we’re back at it with the BOB Books, this time for Gavriel Zev!

It’s been a long time coming, but it’s kind of funny how their little minds work in fits and starts.  He was sounding out words and spelling them on the fridge months ago, like back in February, but then sort of plateaued and never got around to applying the ability to the printed page.  In the time since then, he’s been hard at work on fine-motor skills, like his “same / different” obsession, followed by his “cut-n-paste” obsession.

Then, all of a sudden this week… BOOM.  Reading!!!  Not just a little – a LOT.  Everything he can get his hands on.

Of course, IF it’s possible to predict an early reader, he would have been picked from the start.  More than any of my children, including YM, who was reading fluently at 3.5, Gavriel Zev was obsessed with BOOKS from the moment he was born.  As objects, themselves, and as bearers of marvellous words and tales and pictures and rhymes.  I don’t think you can predict who’s going to read early, even based on a love of books (all my kids have loved books), partly because of the “plateau” effect, where 2-to-4’s tend to focus on one skillset at a time, but if you COULD predict it

He’s done a couple of Starfall books, but they jump quite a bit between levels (and then suddenly JUMP to the long vowels like it’s nothing), as opposed to BOB books, which increase in difficulty much more gradually.  As with Naomi Rivka, we’ll only read each BOB book twice.  GZ, it turns out, is a memorizer in a way Naomi never was… so even on his second time through the second BOB Book (our set arrived missing the first book, for which Rainbow credited me the value of the entire set), he was inventing dialogue from memory.  The third time, I imagine it would ALL be from memory.

It’s fun watching how reading has become its own reward, his treat for nice behaviour.  When we have nummies now (yup, almost 4 years and we’re still at it!), his prize at the end is getting to read a word or two from my book (the REAL reason I love breastfeeding:  drop everything and take a READING BREAK!).  The first couple of days we did that, I picked out words I thought were easiest for him (luckily, I was reading about “God”).  Today,  he started choosing his own.  He read “one” to rhyme with “bone” and I had to explain that that’s how we write the number “1”.  Of course, this means I have to make sure my reading material is entirely appropriate… which I do anyway, OF COURSE!!!

(Or at least, which I do when there are kids around who can read… which is now officially ALL of my kids.  Oy, vey.)

Can I just say that I am very, very proud?