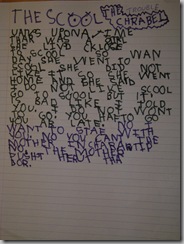 Here’s a story Naomi write at the cottage.  Ted created the cheerful illustration below to go along with it.  I was thrilled to see this and another story she spontaneously wrote while we were up there.  But I was totally surprised, given her occasional protestations and fantasizations about school, by the anti-school tone of the thing.

I have corrected spelling and punctuation so it doesn’t give you a headache:

Once upon a time there was a girl.  She lived close to school, so one day she went to school.  She did not like it so she went home and she said “I do not like school.” 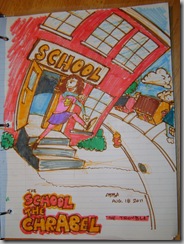 “Go to school.” [presumably, her mother says this]

The mother pushed [push’t] her out the door.

(As a Charlotte Mason fan, I don’t approve of his copying her misspelling of the word “Trouble” (chrabel); Charlotte Mason believed that the more times kids see their own bad spelling, the more it is reinforced)