Plumbing the depths of Jewish catechism. 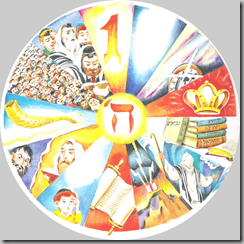 Judaism is traditionally long on action and short on belief.  It’s not that we don’t HAVE beliefs, but we don’t usually shout them out or, other than Shema, say it in unison.

It’s been said many times that it’s possible to be a really good Jew without necessarily believing a lot of specific things.  We are not only allowed to have questions, it is the hallmark of a thinking Jew to question everything.  In most cases, it’s fine to say you don’t know about something, or you haven’t found satisfactory answers just yet.

So, unlike many brands of Christianity, we don’t really have a creed or catechism – a line by line, question and answer, statement of faith used to educate children or new adults.

We are uncomfortable with dogma, for good reason, because it’s so easily abused.  That’s why I’ve always insisted that Judaism is a practice, rather than a faith.  But then there’s Yigdal, which is a poetic rendition of the Rambam’s (Maimonides) 13 articles of faith, composed in 1404.  It is said by skeptics that he perhaps created these “ikkarim” – principles – in response to the persecution of the Inquisition.  Jews forced to drop their Jewish practice could remain Jewish, perhaps, in belief.

Whatever controversies surround this “prayer” (which is really just a poem), since I am supposed to be wrapping up a unit on “Jewish life and life cycle” with my student-in-Judaism, I thought it would be useful to finish with a discussion of Jewish faith – emunah – as described in Yigdal.

Despite there being no “belief prerequisite” for born Jews, bais din (the rabbis supervising conversion) expect converts to embrace these 13 principles along with a few other beliefs – though their emphasis is mainly on Jewish practice.

Despite the importance of this tefillah, there is exactly ONE resource on the entire chinuch.org site (you must log in to download it, but an account is free), but luckily, it looks just about perfect for what we’re doing.  It goes line by line, plumbing the depths of traditional Jewish belief:

1. Hashem, who created everything, exists
2. Hashem is ONE and not many parts
3. Hashem has no body
4. Hashem is First and Last
5. Hashem is the holiest and we may not pray to anything else
6. Hashem chooses holy people to give nevuah - prophecy
7. Moshe is the holiest of all nevi’im - prophets
8. The Torah was given by Hashem through Moshe
9. The Torah and everything in it is forever
10. Hashem knows our thoughts and sees everything
11. Hashem rewards those who are good and punishes those who are bad
12. Moshiach will come
13. There will be techiyas ha meisim - the dead will come back to life

Short, sweet, simple, and the booklet handles it on a children’s level (“Hashem made everything… [including] babies, animals, air, planets, sand, diamonds, paper clips, cucumbers, lollypops and eyelashes.”) but there’s so much more beneath the surface and so far we can go with this.

Our Artscroll Children’s Siddur features the graphic shown above on the Yigdal page, which I love so much that I photocopied it in colour, pasted it onto cardboard, and added a brad with a spinner in the centre so the kids can hold it and turn the wheel as we move from point to point. 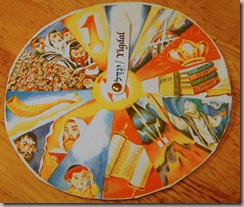 Beyond tambourines, there are so few manipulatives for davening – probably intentionally so, since Judaism is rightly obsessed with not inadvertently worshipping images – that I think this “Yigdal clock” is a stroke of brilliance.

I will bring it with me tomorrow to share with my student as we go over the closest thing we’ve got to a catechism – a Jewish declaration of faith.