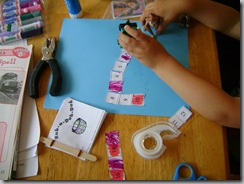 No, I was never concerned.  This is a kid that can swing around the same toy car for two hours, screaming “No, Mater!” at the top of his lungs.

But in case I had any doubts, he was desperate for something to work on today, and I didn’t want to waste my one remaining Same/Different sheet,  so I whipped out this handy sheet of numbered squares from one to twenty.

I actually whipped it out the first time last night when we decided to take the kids out to a restaurant for supper, and it was the only thing in my knapsack that I thought would amuse him until the pizza arrived.  I told Ted, in desperation, to play the following game:  tell Gavriel Zev a number and have him colour it in; then, he tells you a number, and you colour it in.  Well, GZ found this moronic “game” endlessly amusing – it provoked his characteristic ten minutes of chortling and kept him more than entertained. 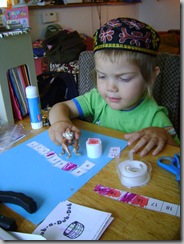 So today, when he came begging me for schoolwork, I pulled out the sheet again and cut out the rows of numbers.  I told GZ he could snip the numbers apart and glue them onto a sheet of coloured paper.

Perfect!  He literally sat there, snipping the numbers apart, then gluing them back together again in reverse order, for forty-five minutes.

When it looked like his attention was flagging, I brought out Tarantula, this little plastic monkey (they name their own toys, I apparently have no say…), and showed him how I could make him “hop” over the numbers, skipping to 2, 4, 6, etc.

He did that for a bit, then set up this “counter” where Tarantula could get silly with the number 10 (he apparently kept saying it was a 1).   Then, he went and got a small metal train engine, who helped Tarantula learn all his numbers properly.

And I just sat back and enjoyed the show…