Review: Famous Figures of Ancient Times, aka Pharaohs at Play! 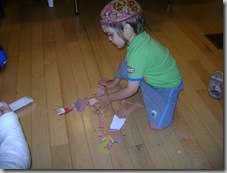 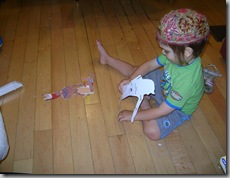 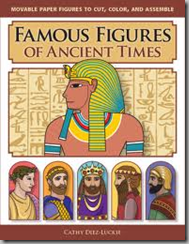 Gavriel Zev is having altogether too much fun with these cut-out jointed historical paper dolls!  I bought this book, Famous Figures of Ancient Times, at Rainbow a while ago – couldn’t resist, even though they’re a bit beyond Naomi Rivka’s skill level.  And I still don’t have the right size hole punch and brads (1/8” – mine’s the standard loose-leaf size), so the limbs turn out a bit floppy.

Which turns out to be just right for Gavriel Zev’s ideas about how Pharaohs should play with each other.  After he completely ignored about an hour of history reading and activities, he swooped in to claim the first two paper dolls.

The book comes with two of each character – one in black-and-white outline form and one in full-colour, ready-to-cut form.  They’re printed on sturdy paper which is perforated down the side for easy removel.  You do have to cut them out yourself, though, then punch the holes and insert the (right sized) brads to make the joints.

The figures are VERY easy to figure out… Naomi could probably do it on her own, except for some of the fiddly cutting. 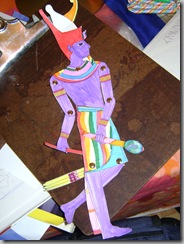 We put together both Narmers a few weeks ago.  Elisheva used her imagination to fill in the black and white one with purple and other bizarre colours, so he looks more like “Pride Parade Narmer”.  I made her colour his crown properly, though.

Today, I made Cheops (just the pre-coloured version)… and Narmer at last has a playmate in all of his glorious afterlife misadventures:  climbing on the sofa, going to the cottage (we’re renting a cottage in a couple of weeks and Gavriel Zev has heard the word, but has no idea what it means), and cunningly hiding his arms behind his back.

I’m pretty impressed with the book, though it’s being used most irreverently here.  It is jam-packed with historical figures, including Julius Caesar and King David.  And boy, I just can’t wait ‘till Cheops and Narmer get to play with Jesus.  And wouldn’t you love to be there for Jesus vs King David – “Whose Religion Reigns Supreme???”  Maybe Hannibal could come in and stomp them with his elephant to just put an end to all the silliness.

Bizarrely, Gavriel Zev seems to have assumed that Cheops is some kind of plural – and in the second video you can see (and hear, if you listen VERY carefully) that he is planning to have him join all the other Cheops at the library where they will show off their no-armedness.  Fun with  history!!!

For $15, Famous Figures of Ancient Times is expensive as a minor supplement to a history curriculum, but the figures are sturdy and really do help the kids remember the personalities of each character better than “2-D” pictures.  (though it’s helpful to point out repeatedly that we don’t really know what any of these folks looked like and these are guesses based on old paintings, clothing styles, etc) 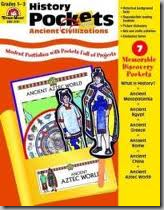 We also managed to cover the next section of Story of the World (Chapter 4:  Old Kingdom of Egypt, Pyramids).  And we did three easy activities out of History Pockets, Ancient Civilizations:  a Nile River crocodile mini-book, folding a paper pyramid, and the “Words to Know” vocabulary section.  Oh, and the “Postcard from Ancient Egypt.” 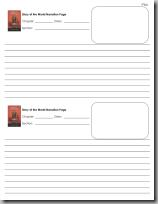 Between all of this and our ongoing Story of the World lapbook project, I think we’re going to get a lot of history covered in a very meaningful way over the coming year…