My father’s Hebrew name was Pinchas – well, Yechiel Pinchas.  It seems mawkish and silly to dedicate a parsha poem to him – so just know I’m thinking of him.

No parsha narrative, no copywork, no nothing this week.  For many other parshiyos, you can find copywork and activities at this page.

Hold onto your hats… it’s another SINGABLE one, folks!!! 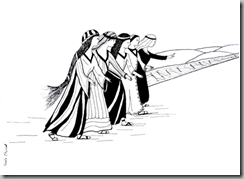 Each one was a tzadekes on her own,
Each one had middos that were shown;
But when they wanted a reply,
They asked a holy guy,
They were… Machlah, Noah, Choglah, Milkah, Tirtzah!

Their father had five daughters but no sons,
So when he died they knew they were the ones,
But if you want to check your facts,
What you’ve got to do is “aks”,
Just like… Machlah, Noah, Choglah, Milkah, Tirtzah!

Now, some say their father was a righteous man,
Gathered wood to show Hashem’s great plan,
But then he had to die,
Left his daughters there to cry,
Weeping… Machlah, Noah, Choglah, Milkah, Tirtzah!

The daughters said their father was no rebel,
Wouldn’t hurt a fly or throw a pebble,
And now they’re all alone,
Without a patch of land or stone,
Daughters Machlah, Noah, Choglah, Milkah, Tirtzah!

So listen to what else those women did:
They could have sat down quietly and hid,
But they spoke right up to all,
And Hashem answered their call,
That of Machlah, Noah, Choglah, Milkah, Tirtzah!

But here’s what else they did that’s special news:
They figured out what Israel means for Jews,
So they claimed their own stake,
A homeland theirs to make,
A new land for… Machlah, Noah, Choglah, Milkah, Tirtzah!