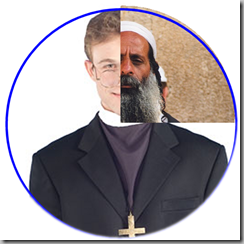 “Why do Jews discriminate, drawing lines  in the sand about who’s Jewish and who isn’t, when Hitler didn’t?”  I came across a post in an online forum asking this question, and felt I had to respond.

The poster asked (I’m paraphrasing now, having removed the original quote) why modern rabbinic authorities have such a tough time with the “Who is a Jew?” issue.  She suggested that Hitler had a simple answer, and didn’t discriminate:  if you were born Jewish, you were a Jew, whether you practiced Judaism or not.* (see footnote)  Since he didn’t discriminate, we shouldn’t either.

So - first things first:  trash the Hitler argument.  Hitler was so very, VERY, disastrously wrong about so many things that we can’t accept his reasoning where "who is a Jew" is concerned.  And anyway, shouldn’t we be allowed to decide for ourselves?

Here’s a common variation:  Hitler accepted anybody as Jewish who had one Jewish grandparent, so many Jews, particularly in the Reform movement, feel this should be our criterion for "admission" to the tribe.  “One-quarter Jewish?  Come on in!!!”

Again, he was so VERY wrong… so EVIL.  Should we therefore allow him to posthumously decide delicate spiritual matters, and ultimately determine where a person stands before his or her Creator?

As for Jews discriminating against each other:

How we live our Jewish lives is between ourselves and God.  Unless I am marrying someone or counting him for a minyan, I don’t really ask what a person’s background is, how and where he/she converted, etc.  Those are HUGE cans of worms that I’d usually rather not open.

But funnily enough, every movement within Judaism has entrance standards of some kind.  No movement I know of says "anybody is Jewish, regardless of their beliefs and practices."  Whatever the criteria are, every movement has its "gatekeepers," who decide which people are and are not Jews.

Who’s in and who’s out:  Sounds like discrimination to me.

In some movements, the criteria are more concrete than others (“keeping Shabbat” vs “identifying with the Jewish people”).  Some of the criteria are pretty much universal, which is at least slightly comforting (“centrality of Torah,” “rejection of Jesus as a Jewish messiah”), but the form they take, in practice, varies widely.

The word discrimination really just means “telling apart” – identifying one thing compared to another thing.  At its essence, this is part of the first bracha we say in a long series of morning brachos, “l’havchin bein yom uvein layla.”  God gives us the power of discernment – He trusts that we’ll use it well.

Should we take people at their word, if they say they’re Jewish?  I do, almost always!  Derech eretz kadma l’Torah – everyday politeness is sometimes an important part of upholding the Torah.  So I don’t pry.

Even if they tell me, I don’t comment extraneously.  If someone asks for my opinion, that’s a different thing.  If they tell me their mother converted to Judaism without a mikveh and never observed Shabbos or learned to say Shema, and ask if I think they’re Jewish… well, most people wouldn’t ask.  Or they wouldn’t ask ME.

In any event, I don’t think we should be consulting Hitler, posthumously, for spiritual advice.

We should definitely keep looking to our leaders for guidance – not as discrimination (in the terrible way people say it today), and not to keep out sincere, well-meaning Jews, but as gate-keepers.

As DISCERNERS – as leaders, to help us know what those entrance standards are, and to guide us through times that are sometimes more perplexing than those our grandparents lived in.

(* FOOTNOTE:  On the point of “born Jews are Jews, practicing or otherwise,” nobody except the most legalistic Reform rabbi – an oxymoron? – would actually dispute this.  Reform is the only movement I know of which theoretically applies “the same requirements… regardless of whether the mother or the father is Jewish.”  They state in their resolution on Patrilineal Descent that no matter which parent is Jewish, a child is only considered Jewish if he/she performs “appropriate and timely public and formal acts of identification with the Jewish faith and people.”  In which case, many, MANY people considered Jewish by Orthodox Judaism would technically be considered not Jewish at all by the Reform movement.  Talk about cutting off your nose to spite your face…)