I’m procrastinating:  there’s an article that needs writing, so naturally, I’m thinking about history and how to teach it.   Instead of what I’m supposed to be thinking of, which is:  daycare caterers and their deceptions, especially one in particular which has since ceased operations.  Fascinating stuff, but naturally, with the Internet at my fingertips, my mind is roaming… to HISTORY.

History is something I have come up against many times over the past year as both big kids wrestle with the province’s only mandatory history course.  Forgive me if you have heard this rant in person (in the case of my children, a couple dozen times).

Basically, to graduate from high school in Ontario, you need two “social studies” credits:  Grade 9 Geography and Grade 10 History.  In Grade 9, you learn about Canada and its climate, resources, trading partners and a bit more.  And in Grade 10, you follow that with Canadian History Since World War 1:  a year of learning about the last 100 years of Canadian history:  WW2; the FLQ crisis (what?  if you don’t know what this is, you’re a bad Canadian… or not a Canadian at all).  And then you’re done.

There are a few OPTIONAL history credits available, but the fact remains, you don’t need to know anything more than the five metres around your navel to graduate from high school and be considered a reasonably literate adult.  To me, this is not only unsatisfactory:  it’s a WASTE of four years of a child’s life. 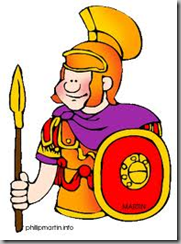 Some other history is covered in the elementary grades, but high school is when the student’s mind is ready for more advanced information; ready to put together everything they’ve learned so far into a comprehensive whole.  Seriously, everything I remember from elementary history can be summed up in just a few words:  Sumerians, dinosaurs, Greeks, pioneers, stock market crash.  I couldn’t have been trusted to put any of these in order before I figured it out as an adult.

I don’t remember anything from the one mandatory high school course – though I must have finished it because I went on to Grade 11 American History (briefly, before dropping out).

(From the American History course, all I remember is the teacher announcing that he had no sense of smell – couldn’t tell the difference between a rose and a fart.  That statement impressed me to no end.)

Why is history so BAD here???  Partly, I think, and this is the part my children  have heard a million times, it’s because history is taught as a thing utterly separate from religion, when in truth, it has often been a thing intimately connected with religion.

Another part of the equation is that history has been divorced from biography, for no good reason.  Biography is interesting; history, without it, is no story at all.  It’s true that biography often degenerates into hagiography – stories told with unrestrained admiration for one player or another.  Biography is often one-sided.

Biography is also often written by the victors, and we, here in Canada, are scared witless by victors.  At least Americans are gutsy:  at least they tell their national stories with pride.  We don’t get to brag, or brag only rarely.

We can’t brag that we burnt down the White House (yay!) because we don’t want to irritate our proud southern neighbours.  We can’t brag that we settled this rough and scary country lest we hurt the feelings of the native Canadians who were here first.  We don’t even brag often enough that we were the Drinking Gourd of hope for countless black slaves – perhaps, again, because we don’t want to tick off our U.S. friends.  Or because the whole business of slavery is kind of sordid.  Wouldn’t want that creeping into a history course.

So what we’re giving our kids – and by WE I mean public and most private education here and throughout North America – is bland-but-balanced descriptions of faceless names and textureless dates.  I honestly believe history is taught worse in Canada than anywhere else in the world.  I dare you to prove me wrong.

I believe Canadian history is WORSE than no history at all – because you come away with the idea that you know a thing or two when really you’ve just done the equivalent of reading a few newspapers. 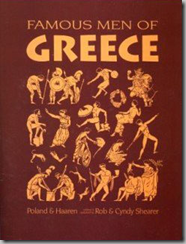 All of which may help to explain why I am increasingly impressed with three elementary-level history books from Greenleaf Press:  Famous Men of Greece, Famous Men of Rome and Famous Men of the Middle Ages.

I first found out about these editions from the Simply Charlotte Mason site.  They’re modern rewrites of public-domain 1904 elementary schooltexts which offer a biographical approach to history.  Here’s the Famous Men of Greece book, though this is the original so it’s much harder to read.

Even updated, by homeschooling husband/wife team Rob and Cyndy Shearer, the modern versions don’t claim to be comprehensive, fair, balanced or anything else.  Just the TITLE causes many prospective readers to bristle:  “Famous MEN???  Where were the WOMEN?”

First of all, some of the famous “men” are, actually women.  The Middle Ages book, for example, includes a chapter on Joan of Arc.  There’s also a mention of Margaret, wife of Henry VI, who “was a brave woman and led her men in a battle in which she gained the victory.”  Not a whole chapter for  her, but many notable men are also not given their own chapter.

The broader point is that the original authors probably considered these women “men” not genitally, but in the word’s encompassing sense of belonging to the human race. 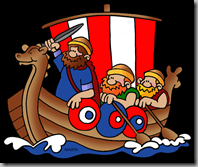 Men or not, what I love about these books is that they’re STORY driven; event driven, not just driven by the necessary march-through-time that plagues so many history texts:  “As 1827 was concluded, it was time for yet another year:  1828, bringing with it another several dates to be memorized.”

Find out more about all of these books (including two original additions written by the Shearers) and lots of other classical resources at the Greenleaf Press site here.

I’m not sure when I will introduce the Famous Men books with the younger kids, but just HAVING them in the house has already been of benefit, because when the big kids run out of reading material, there the Famous Men book are, waiting, beckoning, conveniently across the hall from the bathroom (that’s where the bookshelf lives).

I happen to know Elisheva has read every history thing I’ve put out on that shelf, and probably YM has, too.  So even as they (hopefully) pass CHC2D and close the door on their formal history studies, perhaps forever, I am happy knowing that perhaps it’s not too late for them to acquire a living sense of history after all.

Now – here’s a total non-sequitur, but perhaps a helpful resource for you homeschool history buffs out there.

I noticed on facebook that Chester Comix are on sale through HomeschoolBuyersCo-op.org.  It’s not that cheap – not that I’m at all tempted to teach history with comic books.  But because of the aforementioned procrastinating, I also happened to notice that on the Chester Comix website, there are many FREE teachers’ guides that go along with the corresponding volume of “Comix.”  My ears perk up when I hear (or see) the words “Teachers’ Guide”, so I went to look and they’re actually kind of helpful – with reinforcement activities that could be used alongside almost any history curriculum, including Story of the World, should you opt to NOT use the Activity Guide that goes with that book.  Here’s the link again to the teachers’ guides, in case you missed it.