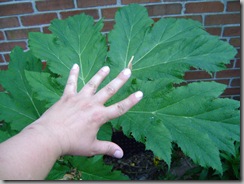 This awful weed has been growing on the tiny slice between our property and the neighbours’ ever since I’ve gardened here.

This year, however, it is bigger than ever and I haven’t yet cut it back (the neighbours have never cut it back but I do and every year I complain about the weird smell of the thing when I have to cut it). 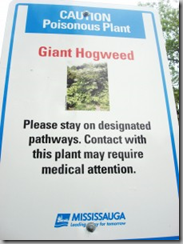 Now, it has come to my attention that there is a weed spreading rampantly through Ontario called Giant Hogweed which is actually more than a little toxic (mostly through the skin).  And wouldn’t you know, it looks a little like this thing I’ve got growing huge and fat behind my composters. 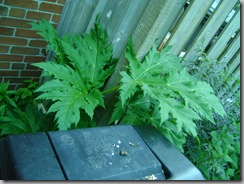 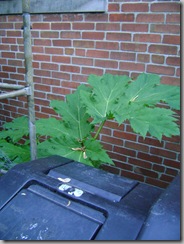 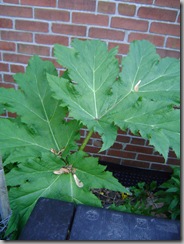 So I’m asking a few questions before I cut it back this year… and dreading what the answers might be, because the proper way to eradicate this thing is to haul it out (carefully) by the (sizeable, stinky) taproot.

Come to think of it, if that’s indeed what it is, I’ll probably get the neighbours involved.  The house is rented out, but there must be a way to reach the landlord somehow.

p.s.  Apparently, it is most likely the native plant cow parsnip.  The smell is a giveaway; apparently, hogweed is odourless.  Also, the big bad guy is MUCH bigger.  Still, I will check the underside of the leaves (carefully) tomorrow, because that is another sure giveaway.  And perhaps STILL ask the landlord to remove these once and for all… :-(