Do they or don’t they? 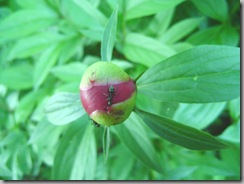 I read somewhere that the ants aren’t really licking the peonies open… but they sure do seem to be hard at work getting these blossoms ready.

Sara says they DO.  I say they don’t.  Because I read it, but now that I see them at work, I am beginning to doubt myself.  I know they love the sticky nectar, but are they really opening the bloom?

I’m just thrilled because I transplanted these two peonies four years ago and  haven’t had anything like a satisfactory blossom on one of them yet.  They were in the shade and I figured they’d be MUCH happier in the sunshine, but so far, they have only sulked.

A few more garden glimpses, taken at dusk, so I apologize for the weird light.

The view from my bench on Shabbos and Yom Tov: 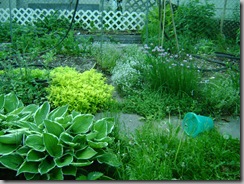 Yes, there are tons of weeds, but I adore how lush and GREEN it all is, how overblown, with the hundreds of tiny white thyme flowers, the bright-green oregano, the giant hosta.  This is what I was dying to see back in February.

Square foot beds.  Still mostly dirt.  First thing on Sunday, I’m going to Fortino’s to buy a bunch of seedlings to fill in the many empty bits. 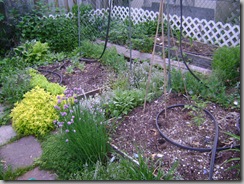 Clematis “Nelly Moser” – there are two more blooms waiting to pop open, but this one was first.  Three flowers isn’t much, but it’s one more than I got last year, and hopefully, it’ll keep doubling (there was a fourth flower coming but the branch must have snapped because it faded before it could bloom). 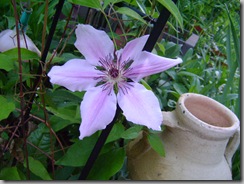 A new columbine!  I don’t remember planting it, but columbines will do that; they morph from generation to generation.  Now there are three colours in the front foundation bed.  Clashy, but I love the giant, forward-facing blooms on this one. 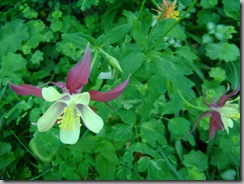 If you look closely at the foliage, you can tell that the leaf miners are back, drilling their way through the leaves of all the columbines and making them unsightly.

But now, I really MUST fold laundry…