It’s another singable one this week, folks, and you’re going to love it…

(To the tune of “one little, two little…” aka indians, candles, etc)

Time for a Shemittah year!

Six years we work and one year to rest,

To care for the land in the way that is best;

Six years to plow and plant and reap it

One year to wait and trust and keep it.

One year the land lies empty and fallow,

Filling up on Torah so our lives won’t be shallow,

We show Hashem our perfect emunah,

Dining on latkes and casserole of tuna.

Then every fifty years, along comes Yoveil,

Another year scraping the bottom of the wheat pail,

Setting free slaves and giving back our lands,

To show that our lives are in Hashem’s hands.

If anyone else had asked us to do it,

We’d laugh our heads off and surely wouldn’t submit,

But when Hashem tells you, you know it’s serious,

Even if his reasons are sometimes mysterious.

In the case of Shemittah we now know it’s true

That leaving land to rest is the best thing to do, 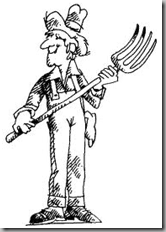 So crops grow stronger and our soils aren’t depleted,

Six years to work and one year – completed!

Time for a Shemittah year!