Homeschool Math Fun on the Cheap! 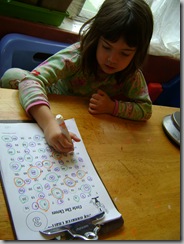 Yes, we’re still homeschooling!  Last week was so insanely busy, with a major outing every single day.  But we still took time to do math, reading, writing, and a couple of other major subjects.

This is a fun activity I’ve started to help Naomi Rivka reflect on some of the skip-counting we’ve been doing using this freebie from CurrClick:

The skip counting e-book contains a bunch of sheets which are basically hundred charts that the child can use to circle the “threes” or “twos” or “fives” or whatever all the way up to 100.  (the one we’re using in this picture is for 3’s) 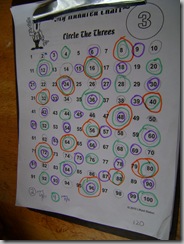 But instead of stopping after she circled the 3’s, I kept the sheet and a few days later, we went through and circled the 2’s.  This helps her visualize which 2’s are also 3’s (like 6, 12, etc).  Over the next week, we also circled the 4’s, and later, the 8’s, so now the page looks like this:

I think it’s helpful for her to see the inter-relationships between numbers:  for example, that all 4’s are 2’s and all 8’s are 4’s.  Plus, she was also predicting which numbers we were going to circle based on the visual patterns.  (if she recognizes a pattern, I let her “cheat” and just circle the right numbers diagonally – why not?)

We have to be careful – for now, I sit with her all the time when she’s doing this, because I left her alone with it at one point and came back to find she had circled many wrong numbers (she skipped a row and it threw her count off).  There’s no way to fix it – with one wrong circle, you lose the visual simplicity and muddle the whole lesson up.  But when it goes right, it’s a nice way to skip-count that has the added appeal of throwing the HUNDRED in there – a fun big number that feels like a goal.

I’m starting a new sheet this week so we can continue, perhaps with 3, 4, 5, and 6 this time.  Definitely an inexpensive and worthwhile activity (which lets us reuse a single sheet of paper for several days in a row!).

We also had one lesson in symmetry, as a lead-up to a lesson in her JUMP Math book.  I drew a few pictures and let her predict which were symmetrical, and then she drew some for me.  I also created some paper shapes so we could fold them different ways and explore the concept of “axis of symmetry”.

I couldn’t find a mirror that was square on the bottom anywhere in the house, but this bathroom mirror worked okay.  Gavriel Zev could not get enough of this “two-headed” car! 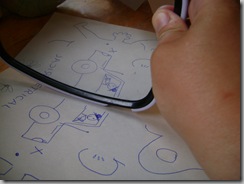 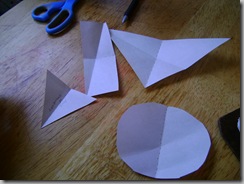 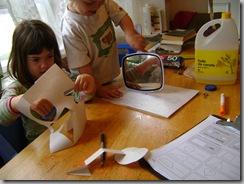 I love it when math is cheap (free!), easy and intuitive!  And if both kids can get involved, that’s a tremendous bonus, too.

What are some cheap math tricks your kids have played around with lately?