The Quinoa (for Pesach) Controversy – does Hashem care? 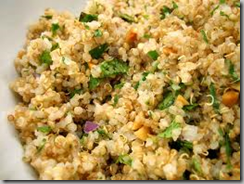 Yesterday, I read an article – I think in Perspectives, Toronto’s frum paper – about how quinoa, for years acceptable for Pesach (like beets, it’s botanically a member of the chenopodia or goosefoot family), has now unequivocally been declared kitniyos by the COR, the local kashrus organization.

They did this not because quinoa is often grown near kitniyos or chometz grains – which is true, but can be checked and labelled appropriately – nor on the basis that it can be ground into flour (because clearly potatoes are permitted even though they can be made into “flour”) but because it grows at the top of a stem – a style of grain called a “wand” or, in Hebrew, sharvit, similar to corn or… well, corn.  There are other considerations as well, but honestly, to me, it doesn’t look so much like a wand: 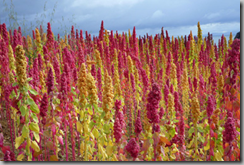 This decision annoys me to no end, and it seems like I’m not the only one.  I’m sure there will be a HUGE reaction to this, perhaps most especially in Ashkenazi vegetarian circles where quinoa has been the saving grace at Pesach time.  I don’t eat quinoa – don’t trust it, don’t like it… but I’m aghast that so many decent people are going to have to either comply with or knowingly defy this new ruling.

There’s a decent article over here at Tablet magazine which you can read if you want, tracing the history of the various bans and decisions of the agencies (and Reb Moshe’s famous psak that peanuts and peanut oil should be permitted to Ashkenazim – there’s one I just learned about this year!), but as I was reading through the comments section, I came across one that totally rubbed me the wrong way:

The Orthodox really get carried away with all these rules. Do they think God really cares if we accidentally ingest a molecule of treyf, or chometz in the case of Pesach? Can’t we just leave it at not eating leavened bread during Pesach and not eating foods specifically prohibited in Torah the rest of the year? The real test of holiness is in how we treat our fellow humans, Jewish or not- with charity, lovingkindness, fairness, etc. and not in obsessing over minutiae of dietary laws.

Hey, @Solomon:  "The Orthodox really get carried away with all these rules. Do they think God really cares..."

Reminds me of a certain question we read in the Haggadah last week: "What is this service to YOU?"  (to you, and not to HIMSELF).  You've already built solid barriers between what YOU deem sane, reasonable Judaism and the entire rest of the Jewish world.

It's a slippery slope, to suggest that God is paying attention to YOU, but probably doesn't notice much what other Jews are doing.

Add your thoughts below or on the original site.